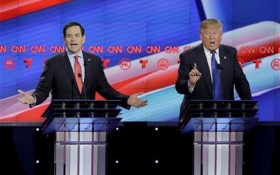 Senators Marco Rubio and Ted Cruz both unleashed harsh criticism on Donald Trump in last night’s GOP debate, in a final push to stop his momentum ahead of next week’s Super Tuesday primaries.

But Trump has already weathered criticism in 10 previous debates and is leading in nearly all remaining primary states — so the GOP nomination still appears solidly in his hands.

Rubio, along with most of the other GOP presidential candidates, had shied away from confronting Trump for months, tiptoeing around the Republican frontrunner.

Only now, with Trump pulling away from the field, did Rubio aggressively try to attack the billionaire businessman’s grip on the Republican race, with occasional help from Cruz.

Rubio’s assertive posture last night was sure to be cheered by establishment Republicans who have rallied around his campaign in recent days, desperate for the senator to become a viable alternative to Trump. But privately, many were likely wondering why it took so long for Rubio to make his move — and whether his strong showing came too late.

A strong showing by Trump will put the nomination within his grasp, leaving little time for his rivals to stop him.

Rubio was sometimes joined by Cruz in tag-team attacks on Trump. It was a tactical shift for two senators who had trained their fire on each other in recent weeks, both betting that the best strategy was to clear the field of other rivals before moving on to Trump.

But Tuesday’s Nevada caucuses clearly changed their calculus. Trump dominated that contest, beating second-place Rubio by more than 20 points, and pulling ahead significantly in the early delegate count after victories in South Carolina and New Hampshire as well.

During a particularly biting exchange, Rubio said that if Trump hadn’t inherited family money, he would be “selling watches in Manhattan.”

Trump punched back with trademark insults.

After Rubio criticized his hiring practices, the businessman said, “You haven’t hired one person, you liar.” And when Cruz challenged Trump’s conservative credentials by suggesting he’s been too cozy with Democrats, the front-runner ripped the senator for being loathed by many of his Senate colleagues.

“You get along with nobody,” Trump said. “You should be ashamed of yourself.”

Even before the debate was over, Trump suggested he was eager to keep up the fight.