Trump has good news for Detroit workers - The Horn News 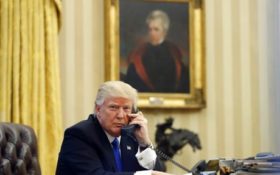 Moving forcefully against Obama-era environmental rules, President Donald Trump is set to announce in Michigan plans to re-examine federal requirements that regulate the fuel efficiency of new cars and trucks.

That’s good news for Detroit autoworkers — it could put a lot of them back to work.

Trump is expected to reveal his plans during an appearance Wednesday at the American Center for Mobility in Detroit where he’ll challenge the Corporate Average Fuel Economy (CAFE) emissions targets that were a centerpiece of former President Barack Obama’s strategy to combat global warming. The rollback underscores the Trump administration’s focus on boosting economic growth.

The Detroit center was used to produce B-24 bombers during World War II and is now in the process of being converted into an automotive testing and product development center.

While visiting there the president is expected to meet with auto executives and workers and discuss “how his plans for rolling back federal red tape will lead to more American jobs and higher wages, specifically in the automobile sector,” Press Secretary Sean Spicer told reporters.

The EPA under Obama’s stewardship had promulgated a rule for cars and trucks requiring a fleet-wide average of 54.5 mpg by 2025.

The president will travel later Wednesday to Nashville, Tennessee, where he’ll lay a wreath at President Andrew Jackson’s tomb to mark what would have been Jackson’s 250th birthday, before holding a campaign-style rally in the city.

But the most significant move of the day will likely be the president’s announcement on the CAFE emissions targets. The move will have no immediate effect.

Back in 2012, the Obama set fuel-economy regulations for model years 2017-2025. The administration agreed to complete a midterm evaluation in 2018. But seven days before Obama left office, the EPA decided to keep the stringent requirements it had set in place for model years 2022 to 2025. The industry balked at the decision, insisting it was rushed through to beat the change in administrations.

Trump will announce that he’s putting that midterm review back on track, so that officials can spend another year studying the issue before setting new standards in 2018.