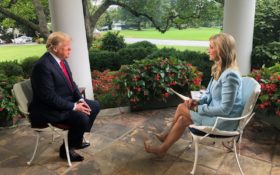 Fox News’ Ainsley Earhardt was by turn sympathetic and gently probing during her interview with President Donald Trump that aired on Thursday.

Trump called Earhardt “a truly great person” while tweeting a promotion of her book in May. Portions of the interview were aired throughout the three-hour program.

Earhardt started with ice-breakers, asking Trump how he handles all the publicity. She interjected, “right,” when the president complained that reporters “like to cover nonsense.”

Her questions about the news were direct, if not particularly challenging, and she didn’t ignore the big stories.

She asked Trump to respond to Cohen’s claim that the president directed him to pay for the silence of two women who said they had affairs with Trump. She said that “one story said” that Trump didn’t know anything about the payments.

Trump said the payments didn’t come from his campaign, “they came from me.”

Earhardt also asked the president if he was considering pardoning Manafort.

While Trump proclaims his “great respect” for Manafort in the interview, he skirted the question about whether or not he would pardon his former aide.

Earhardt also asked Trump about the murder of Iowa college student Mollie Tibbetts. The government says the suspect is a Mexican in the country illegally; his lawyers say that’s not true.

But, the most important question that Earhardt asked the president was what grade he would award himself — and he answered honestly.

“I give myself an A plus,” Trump responded.