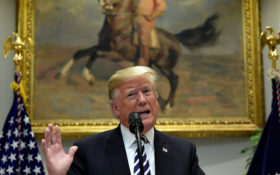 Even the liberal media is admitting the Democrat-led impeachment inquiry isn’t convincing. In the all-important court of public opinion, Rep. Adam Schiff, D-Calif., and his political allies aren’t winning the support of the American voter.

According to the latest PBS NewsHour/NPR News poll on impeachment released early Tuesday, American public opinion hasn’t changed at all on Trump after the first week of the impeachment inquiry.

A huge majority of polled voters, 65 percent, said that there’s nothing in the Democrat-led impeachment inquiry that could change their minds on Trump.

Only 30 percent of voters said that testimony in the impeachment inquiry could sway their opinion.

Split among party lines, Republican voters generally support Trump. Some conceded that his Ukraininan phone call was a bad look politically, but only seven percent said it was an impeachable offense.

A stunning 93 percent of Republican voters told PBS/NPR pollsters that they do not want Trump removed from office.

On the other hand, Democratic voters overwhelmingly want Trump to be ousted; 82 percent of Democratic respondents want Trump impeached and removed from the Oval Office.

But only 39 percent of Independent voters — the key swing voters in the 2020 election — agree with Democrats.

All of this is a bad sign for Schiff, who needs to convince these critical Independent voters to back Democrats in the upcoming election.

So far, voters are not convinced by Schiff’s witnesses — and the overwhelming majority say they’ll never be convinced.

That’s very good news for Trump and his supporters.

Meanwhile, most Americans said they’re following the inquiry, with 64% saying they’re keeping up with the news about it, and Democrats being more likely to say they’re staying updated.