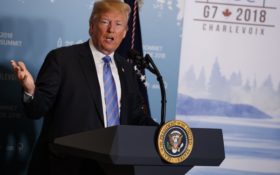 Schneiderman’s office had been sitting on this case for nearly two years, and his successor waited until Trump was in the best state of his presidency to bring forth the lawsuit. Critics believe they coordinated the timing of the lawsuit for political reasons.

The Donald J. Trump Foundation “was little more than a checkbook for payments from Mr. Trump or his businesses to nonprofits, regardless of their purpose or legality,” Democratic Attorney General Barbara Underwood said as she sued to dissolve the foundation and seek $2.8 million in restitution. Underwood replaced Schneiderman after the former AG quit when a history of racist sexual abuse surfaced.

The lawsuit was filed Thursday against the foundation and its directors, Trump and his children Donald Trump Jr., Eric Trump and Ivanka Trump.

Trump fired back. He called the case “ridiculous” and said he would not settle the lawsuit.

The sleazy New York Democrats, and their now disgraced (and run out of town) A.G. Eric Schneiderman, are doing everything they can to sue me on a foundation that took in $18,800,000 and gave out to charity more money than it took in, $19,200,000. I won’t settle this case!…

….Schneiderman, who ran the Clinton campaign in New York, never had the guts to bring this ridiculous case, which lingered in their office for almost 2 years. Now he resigned his office in disgrace, and his disciples brought it when we would not settle.

The foundation’s fund were used “exclusively for charitable, religious, scientific, literary or educational purposes,” either directly or through other organizations.

Schneiderman began investigating the foundation in 2016 following Washington Post reports that its spending personally benefited the presidential candidate. He resigned in disgrace earlier this year.

Critics have pointed out the timing of the lawsuit comes days after Trump successfully orchestrated an agreement with North Korea to denuclearization — an achievement no other president could accomplish.

The mainstream media is eating up the news of a lawsuit against Trump — but fail to recognize that they are standing behind a man that abuses women.