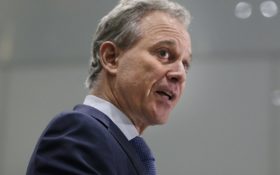 The Manhattan District Attorney’s office is investigating allegations of violence against women by New York Attorney General Eric Schneiderman, the top Democratic prosecutor in the United States and close friend of the Clinton family. Schneiderman resigned just hours after accounts of abuse by four women.

It was a swift and stunning fall for the Women’s March leader who held himself out as a champion of women and a liberal foil to President Donald Trump, and who pledged to use his office to hold others accountable for abusing their power.

The women described being slapped and choked, verbally and racially abused and threatened by Schneiderman. Some also described him as a heavy drinker.

The fall from grace happened almost exactly like Trump predicted five years ago. He tweeted that Schneiderman was worse than convicted pedophile Anthony Weiner and former New York Gov. Elliot Spitzer, who was caught in a humiliating prostitution scandal —

Weiner is gone, Spitzer is gone – next will be lightweight A.G. Eric Schneiderman. Is he a crook? Wait and see, worse than Spitzer or Weiner

The abuse from the top Democrat often happened during what were supposed to be romantic encounters, but the women said the violence was not consensual.

Schneiderman, 63, implied in a statement that his conduct was either welcomed by the women, or was not as they described.

“In the privacy of intimate relationships, I have engaged in role-playing and other consensual sexual activity. I have not assaulted anyone. I have never engaged in non-consensual sex, which is a line I would not cross,” he said.

Danny Frost, a spokesman for Manhattan District Attorney Cyrus R. Vance Jr., said in a statement late Monday that prosecutors would look into the claims.

Sponsored: Are you in pain?

It’s an unusual twist: Schneiderman’s office had been tasked with investigating the Manhattan District Attorney’s office over its handling of a 2015 sex assault probe involving Harvey Weinstein that resulted in no criminal charges.

NYPD officials said they had not received any complaints, but would investigate thoroughly should anyone come forward.

The state’s Solicitor General, Barbara Underwood, will serve as acting Attorney General. She has a long history of legal work including serving in the Eastern District of New York and in the Manhattan, Brooklyn and Queens district attorney offices.

“In the last several hours, serious allegations, which I strongly contest, have been made against me,” he said in a statement late Monday. “While these allegations are unrelated to my professional conduct or the operations of the office, they will effectively prevent me from leading the office’s work at this critical time.” He said he would resign at the close of business on Tuesday.

Two women who spoke to The New Yorker on the record, Michelle Manning Barish and Tanya Selvaratnam, both said the physical abuse escalated over time.

“After the most difficult month of my life-I spoke up. For my daughter and for all women. I could not remain silent and encourage other women to be brave for me. I could not,” Manning Barish wrote on Twitter after the story was published.

Manning Barish said Schneiderman became violent a few weeks after they began dating. She said she confided in friends, including novelist Salman Rushdie.

Selvaratnam, who was born in Sri Lanka, said Schneiderman started calling her his “brown slave” and made her say that she was “his property.”

“After I found out that other women had been abused by Attorney-General Schneiderman in a similar manner many years before me, I wondered, who’s next, and knew something needed to be done,” Selvaratnam said in a statement to the AP.

Schneiderman has been a vocal supporter of the #MeToo movement. He filed a lawsuit in February against Weinstein and the Weinstein Co. following an investigation into allegations of sexual misconduct. Schneiderman said the company broke New York law by failing to protect employees from “pervasive sexual harassment, intimidation and discrimination.”

Sponsored: Do you know the most important indicator of a healthy heart?

He launched a civil rights probe into the New York City-based company in October after The New York Times and The New Yorker exposed allegations of sexual assault and harassment spanning decades. The company later fired Weinstein.

The women accusing Schneiderman said seeing him speak out on these issues was part of what prompted them to come forward.

The former state senator became attorney general in 2010 and had been running for re-election this year. He also has been a longtime critic of Trump, and has been part of several efforts to push back against some of his actions in the White House, like the rescinding former President Barack Obama’s protections for illegal immigrants.

Last month, he urged state lawmakers to close a loophole that he said could be used to fight state charges by anyone who has received a federal pardon for similar federal charges.

No one is above the law, and I'll continue to remind President Trump and his administration of that fact everyday.

Trump, Jr. brought back the tweet with the simple reply —