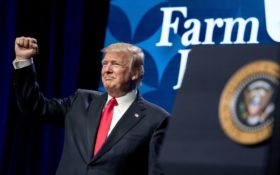 Connecting with rural Americans, President Donald Trump on Monday hailed his tax overhaul as a victory for family farmers and pitched his vision to expand access to broadband internet, a cornerstone of economic development in the nation’s heartland.

“Those towers are going to go up and you’re going to have great, great broadband,” Trump told the annual convention of the American Farm Bureau Federation.

Trump became the first president in a quarter-century to address the federation’s convention, using the trip to Nashville as a backdrop for a White House report that included proposals to stimulate a segment of the national economy that has lagged behind others. His Southern swing also included a stop in Atlanta for the national college football championship game.

Joined by Agriculture Secretary Sonny Perdue, Senate Agriculture Committee Chairman Pat Roberts, R-Kan., and a group of Tennessee lawmakers, Trump said most of the benefits of the tax legislation are “going to working families, small businesses, and who — the family farmer.”

The package Trump signed into law last month provides tax cuts for corporations and the wealthiest Americans, and more reductions for middle- and low-income individuals and families.

The president vastly inflated the value of the package in his speech, citing “a total of $5.5 trillion in tax cuts, with most of those benefits going to working families, small businesses and who? The family farmer.” The estimated value of the tax cuts is actually $1.5 trillion for families and businesses because of cuts in deductions and the use of other steps to generate offsetting tax revenue.

The president warned against voting for Democrats in this November’s midterm elections, saying they would undo the tax bill. “If the Democrats ever had the chance, the first thing they would do is get rid of it and raise up your taxes,” Trump said.

Trump also highlighted the doubling of the threshold for the estate tax — earning a standing ovation from the audience— and the ability for companies to immediately write off the full cost of new equipment. He said that “in every decision we make, we are honoring America’s proud farming legacy.”

Central to the report is the assessment that the “provider for an equalization among rural America is connectivity; that high-speed internet should remain a high priority for the administration,” said Ray Starling, the special assistant to the president for agriculture, trade and food assistance. The report calls for expediting federal permitting to allow for broadband internet expansion in rural areas and for making it easier for providers to place cell towers on federal lands.

Trump signed an executive order following his speech on rural broadband, aimed at easing the process to put private broadband infrastructure on federal property. The White House described the move, along with a memorandum directing the Interior Department to work on a plan to increase access to their facilities for broadband deployment, as “incremental,” but the start of an effort to make progress on the issue.

White House officials said all work was in the early stages and did not offer an overall timeline. Officials noted the price tag for rural broadband expansion has been estimated at $80 billion, but said the administration had not determined a cost.

The president discussed his work of rolling back the Obama administration’s interpretation of the Clean Water Act, which had greatly expanded the list of bodies of water subject to federal regulation. The Farm Bureau ran a public relations campaign against the rule and called it “dangerous and unlawful.”

The Agriculture and Rural Prosperity Task Force report highlights the importance of addressing the opioid crisis, which has disproportionately affected rural communities.