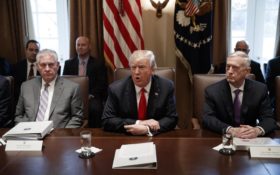 President Donald Trump on Friday will extend waivers on Iran nuclear sanctions, keeping alive the landmark 2015 deal for at least another several months despite his past vows to scuttle the deal, officials said

Three officials said the waivers will be accompanied by other, targeted sanctions on Iran for human rights abuses and a stern warning that Trump will pull out of the nuclear deal negotiated by the Obama administration if fixes aren’t made by spring. The next deadline for extending nuclear sanctions relief will come in mid-May.

The officials spoke on condition of anonymity because they weren’t authorized to publicly preview the decision. They said Trump’s waiver announcement will also include harsh criticism of Iran’s response to recent protests against the Islamic Republic’s leadership.

Trump’s decision has been expected since earlier this week. Officials, congressional aides and outside administration advisers said the president would likely extend the sanctions waivers, citing progress in amending U.S. legislation that governs Washington’s participation in the accord.

The sanctions that Trump has to waive deal with Iran’s central bank. During Barack Obama’s presidency, these penalties largely cut Iran out of the international financial system, until they were suspended under the nuclear deal. While Trump will continue that suspension, he is preparing to impose penalties on Iranian entities for other behavior the U.S. finds objectionable, such as missile testing and alleged human rights violations.

That balance is aimed at satisfying Trump’s demand to raise pressure on Iran, while not embarking on a frontal assault on the most central trade-offs of the nuclear agreement. While the U.S. and other world powers rolled back economic restrictions on Tehran, the Iranians severely curtailed their enrichment of uranium and other nuclear activity. Trump has complained that many of the Iranian restrictions expire next decade and has vacillated between talk of toughening the deal and pulling the U.S. out entirely.

Meanwhile, the administration is trying to secure a face-saving fix from Congress on the requirement for Trump to address Iran’s compliance every three months. In October, Trump decertified the nuclear deal under U.S. law, saying the sanctions relief was disproportionate to Iran’s nuclear concessions, and describing the arrangement as contrary to America’s national security interests.

Trump has particularly bristled at having to give Iran a “thumbs up” every few months by acknowledging that it is meeting its nuclear requirements, which should allow it to invest in foreign banks, sell petroleum overseas, buy U.S. and European aircraft, and so forth.