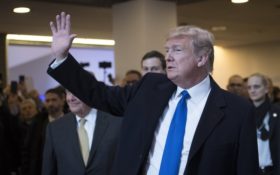 President Donald Trump has arrived in the Swiss Alps to attend the World Economic Forum — and he’s bringing with him a two-word message.

Trump flew to the town of Davos by helicopter from Zurich, where he arrived Thursday morning after flying overnight from Washington.

Trump is the first sitting president to attend the annual summit since Bill Clinton in 2000 and it is his first appearance at the World Economic Forum.

“We’re very happy to be here,” Trump said as he arrived at the World Economic Forum. “The United States is doing very well, and will continue to do well and this will be a very exciting two days.”

He said he was bringing a message of “peace and prosperity” to the gathering of world leaders, business executives and celebrities. But make no mistake, he’s there to argue for America’s interests only.

While the president is expected to declare that the United States is open for business, the protectionist-leaning president’s attendance at the annual gathering for free-trade-loving political and business elites has raised eyebrows. His decision to sign new tariffs boosting American manufacturers this week has prompted fresh concerns among the global elites about his nationalist tendencies.

In a tweet sent before departing the White House Trump said, “Our economy is now booming and with all I am doing, will only get better…Our country is finally WINNING again!”

Will soon be heading to Davos, Switzerland, to tell the world how great America is and is doing. Our economy is now booming and with all I am doing, will only get better…Our country is finally WINNING again!

U.S. Treasury Secretary Steven Mnuchin got to Davos ahead of Trump and insisted Wednesday that the United States supports free trade.

“America First’ does mean working with the rest of the world,” said Mnuchin, who is leading the largest U.S. delegation ever to attend the exclusive gathering. “It just means that President Trump is looking out for American workers and American interests, no different than he expects other leaders would look out for their own.”

U.S. Commerce Secretary Wilbur Ross argued that new U.S. tariffs on imported solar-energy components and large washing machines are meant to deal with “inappropriate behavior” by other countries and are not protectionist. Still, Ross conceded that China could respond by imposing its own tariffs on U.S. products.

As he signed the tariffs, Trump said he was heading to Davos to talk “about investing in the United States again.”

The president is set to address the forum Friday. He is expected to showcase the booming U.S. economy and measures like his recent tax overhaul, claiming that a thriving America benefits the world. A vocal critic of trade deals he sees as unfair to the United States, Trump will also stress the need for what he sees as fair competition.

The invitation-only event focused on global cooperation and free trade seems like an unnatural fit for Trump, who rode a wave of nationalistic angst to the White House. But Mnuchin dismissed any concerns that the president may get a cool reception.

“We don’t have to worry about this crowd,” he said.

During his two-day stop, the president will attend a reception in his honor, host European executives for dinner and meet with world leaders. He began his visit with a sit-down with British Prime Minister Theresa May, and will meet with Israeli Prime Minister Benjamin Netanyahu, Swiss President Alain Berset and Rwandan President Paul Kagame.

National Security Adviser H.R. McMaster said the United States continues to have a “special relationship” with Britain. He said Trump will discuss security and economic issues with the Rwandan leader, who chairs the African Union.

Trump concluded 2017 with the passage of a major tax overhaul, a key policy achievement. But the first few weeks of 2018 have been defined by political battles over government spending, Trump’s incendiary Twitter feed and explosive revelations in a new book that portrays Trump as an unstable leader. A brief government shutdown threatened to derail the Davos trip altogether.

The president has criticized global pacts, withdrawing from the Trans-Pacific Partnership on trade, demanding changes to the North American Free Trade Agreement and announcing his intent to exit the Paris climate accord.

In the lead-up to Trump’s arrival, other leaders at the meeting have argued against any drift toward protectionism in the global economy. Indian Prime Minister Narendra Modi said new barriers to trade could pose a danger on a par with climate change and radical Islamic terror attacks. And Canada’s Justin Trudeau revealed that his country and the 10 remaining members of the Trans-Pacific Partnership have revised their trade deal following the U.S. withdrawal.

Trump’s top economic adviser Gary Cohn rejected the suggestion that the United States had pulled back from international cooperation.

“We are very open to free, fair, reciprocal trade,” he said, later adding: “Look, the U.S. is pulling back from nothing. The U.S. is involved.”

This year’s forum theme is “Creating a Shared Future in a Fractured World.” Panel topics include “The Global Impact of America First,” ″A Society Divided,” ″Post-Establishment Politics?” and “The Weaponization of Culture.”

Stephen Moore, a fellow at the conservative-oriented Heritage Foundation who advised the Trump campaign, said he initially had reservations about Trump going, saying, “those are people who have been completely wrong on the economy for 20 years.”

But he added, “The more I thought about it, I thought maybe there is some benefit to going because he can lecture these people.”