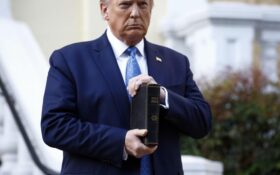 A federal judge dismissed almost every claim filed by activists and liberal groups who accused the Trump administration of violating the civil rights of protesters who were forcefully removed by police.

The controversy stemmed from then-President Donald Trump walking to a church near the White House that Black Lives Matter protesters had tried to burn to the ground. Trump used the burnt church as the background in a photo-op.

U.S. District Judge Dabney Friedrich said Monday the claims in the suit, which alleged that Trump and then-Attorney General William Barr had conspired to violate the rights of protesters last June, were speculative and it was premature for the court to conclude whether the actions of law enforcement officers were justified.

Friedrich dismissed the claims against Barr and other federal officials, including the acting U.S. Park Police chief, Gregory Monahan, finding there wasn’t sufficient evidence to prove there was any agreement or plan to violate the rights of the protesters.

The judge also added that the law gives them immunity in civil litigation.

The lawsuit stemmed from one of the most high-profile moments of the Trump presidency, when federal and local law enforcement officials forced a group of protesters to disperse from Lafayette Square outside of the White House. Officers were seen shoving non-compliant protesters and journalists as they pushed the crowd back.

Barr has said he met with other law enforcement officials earlier that day to review a plan to extend the security perimeter around the White House to protect federal agents after days of unrest in Washington following the death of George Floyd at the hands of police officers in Minneapolis.

After the crowd was forcefully dispersed, Trump, followed by an entourage of his most senior aides — including Barr — along with Secret Service agents and reporters, walked over to St. John’s Church, a landmark building where every president has prayed, which had been attacked by arsonists.

In a statement, Arthur Ago, the director of the criminal justice project at the Lawyers’ Committee for Civil Rights Under Law, said the ruling set an “extremely dangerous precedent” and that former officials like Barr were “getting off scot-free.”

Media reports at the time indicated that Trump had ordered the protesters be removed so he could get a photo op.

A year later, an Inspector General report on the incident rejected the media’s narrative.

The IG office said, “the evidence we obtained did not support a finding that the USPP [United States Park Police] cleared the park to allow the President to survey the damage and walk to St. John’s Church.”

“Instead, the evidence we reviewed showed that the USPP cleared the park to allow the contractor to safely install the antiscale fencing in response to destruction of property and injury to officers occurring on May 30 and 31,” it read.

In other words, the Park Service had already planned to clear out the unruly protesters and increase the security perimeter after rioting, looting, vandalism, and arson threatened much of Washington, D.C.