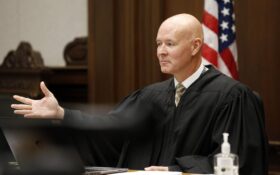 A judge ordered an Iowa county Thursday to invalidate 50,000 requests for absentee ballots, agreeing with President Donald Trump’s campaign that its elections commissioner overstepped his authority by pre-filling them with voters’ personal information.

Judge Ian Thornhill issued a temporary injunction ordering Linn County Auditor Joel Miller to notify voters in writing that the forms should not have been pre-filled with their information and cannot be processed. Instead, they’ll have to either fill out new requests for absentee ballots or vote on Election Day.

The ruling marks an initial victory for Trump’s challenges to absentee voting procedures in three counties in Iowa, which is expected to be competitive in his race against Democratic nominee Joe Biden. They’re part of an unprecedented legal battle involving dozens of lawsuits nationwide that will shape the rules of the election.

Republicans said the ruling would hold a “rogue auditor” accountable and enhance voting security, while outraged Democrats called it an act of voter suppression. Miller said he would abide by the order, pledging to void the returned requests and send out new blank forms to voters next month.

At issue was Miller’s decision to send absentee ballot request forms to 140,000 voters in July that were already filled with their personal information, including names, dates of birth and, most significantly, voter identification numbers.

Miller, a Democrat, has said his goal was to make it as easy as possible to vote absentee during a pandemic, as the virus spreads uncontrolled across the state.

Voters had to review, sign and return the forms to request ballots that will be mailed beginning Oct. 5. About 50,000 requests have been returned in the Democratic-leaning county, which is Iowa’s second largest and is recovering from a derecho that devastated the region Aug. 10. The phone system for the county elections office remained out of service Thursday.

Thornhill ruled that Miller’s mailing violated a “clear directive” from Iowa Secretary of State Paul Pate, who told county officials in July that absentee ballot request forms mailed to voters must be blank in order to ensure uniformity.

Absentee voting, in which voters send their ballots by mail or drop them off at county offices, has become popular during the coronavirus pandemic as a way to avoid the risk of crowded polling places. It led to record turnout during Iowa’s primary in June.

But weeks later, the Republican-controlled Legislature passed a new law to make such voting harder. It blocked auditors from using their databases to fill in voters’ four-digit voting identification numbers, which few know and are routinely left blank on the forms.

Instead, the law requires auditors to contact voters by email or mail to have them correct mistakes themselves. Supporters argued that requiring voters to fill out their forms was a step to make absentee ballots more secure.

Miller and elections commissioners in Johnson and Woodbury counties said contacting voters who leave the information blank would have been too burdensome and potentially disenfranchised people, so they mailed forms with that information already filled in. They contended that the law did not block them from doing so.

Thornhill, appointed by Democratic Gov. Chet Culver in 2009, ruled that the Trump campaign and Republican groups had legal standing to bring the case. He found that they demonstrated a likelihood of being harmed, noting that not all Iowa counties have the money to send out pre-filled absentee ballot requests.

He found that Trump and the GOP would likely prevail on the merits, saying Miller’s decision to populate the forms sent to voters went against Pate’s directive and the intent of the new law.

Thornhill acknowledged that extraordinary remedial measures will have to be taken under his order but that Miller’s “words and actions show he was aware of the risk he was taking.” He said voters will not lose their right to vote and still have time to acquire absentee ballots in another manner.

The secretary of state has alleged that the mailing violated a law intended to protect personal information stored in government and corporate databases, and asked prosecutors to investigate.

It argues that Miller had no legitimate purpose to access voters’ identification numbers and share them with a vendor that processed the mailing. Attorney general’s office spokesman Lynn Hicks said the office hasn’t decided whether to open an investigation.

Assistant Linn County attorney Elena Wolford argued that the state’s directive was invalid and not binding on Miller, who has broad authority to administer county elections.

She called the mailing an attempt to expand voting access during the pandemic and said Republicans had not shown any injury, saying their argument that it could encourage voter fraud was hypothetical.

She warned that an injunction would hurt voters who are expecting to receive absentee ballots and taxpayers who would be forced to pay for additional notifications to be sent.