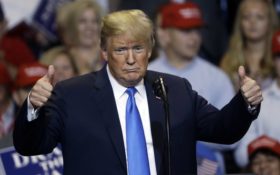 Time and time again, the media has undersold his accomplishments and doubted his political rise — and Trump has had enough.

Trump ridiculed the media for diminishing what he accomplished at his Singapore summit with North Korea leader Kim Jong Un, and he slammed the press because “the fake news refused to call” that Trump won the state of Pennsylvania on election night.

“Only negative stories from the fakers back there,” the president declared.

With each denunciation, the crowd jeered and screamed at the press in the holding pen at the back of the arena.

Trump’s used the rally as a time to focus on pushing for tougher borders, and explaining the threat that violent gangs like MS-13 pose.

The president then looked ahead to his 2020 re-election campaign, celebrating his new slogan, “Keep America Great Again.”