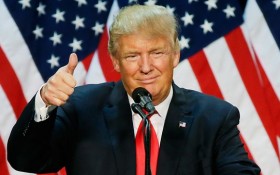 Does the Trump Train have brakes?

It doesn’t appear so.

Polls are showing a surging in support for Republican presidential nominee Donald Trump in the general election — and if trends continue, it could be an election landslide.

In early March, Trump was down ten points in the hypothetical match-up with presumed Democratic presidential nominee Hillary Clinton. He’s rapidly closed that gap since winning the GOP nomination, and on average is in a virtual lock with Clinton — a remarkably huge shift in such a short period of time.

Even more remarkably, he’s starting to pull ahead according to both Fox News and Rasmussen.

According to The New York Times, it’s partly because of the inability of Clinton to put away Vermont Sen. Bernie Sanders that’s hurting her. While Clinton “is grappling with Senator Bernie Sanders and how to win over his impassioned supporters.”

The polling “reveals that Republican voters are starting to fall in line with Mr. Trump now that he is their presumptive nominee — and that they expect party officials to do the same,” The New York Times writes, and that “many of the party’s rank-and-file voters think that while Mr. Trump may be imperfect, the time has come to rally to their unlikely standard-bearer — if only to keep Mrs. Clinton out of the White House.”

Meanwhile, Trump has kept himself planted firmly in the political spotlight this week with one headline-grabbing move after another — launching a social media defense of his treatment of women, listing possible Supreme Court nominees, rapidly declaring an Egyptian plane crash an act of terrorism.

But Clinton’s stay-above-the-fray attitude masks unresolved questions that have gnawed at her campaign since Trump virtually locked up the Republican nomination. How can the wonkish Clinton counteract Trump’s finely-tuned ability to command attention? Can she win the White House by letting Trump run on his terms, hoping his unorthodox candidacy wears thin with voters by November?

Or does she need to make a positive case for her own candidacy, something she has struggled to articulate during the Democratic primary?

“She’s going to have to do things to keep her side motivated, to keep people excited, keep it aspirational,” said Steve Schale, a Florida Democratic strategist who advised President Barack Obama’s White House campaigns.

Sanders’ supporters can repeat whole sections of his campaign speech verbatim. Trump’s backers chime in on cue when he asks who will pay for his proposed border wall with Mexico.

The former secretary of state, by contrast, throws a policy-filled kitchen sink at voters.

And her ability to define the race on her own terms could only get harder in a face-off with Trump, the dominant force in this presidential contest and a master of defining his opponents before they can define themselves.

To be sure, Clinton finally close to clinching the Democratic nomination. But facing Trump will be another matter, with his capacity to set the tone for the day in the morning through frequent tweets and calls into news shows, catching his rivals off guard and leaving them scrambling to catch up.

The last days underscored Trump’s grip on the spotlight, and his refusal to back down to political correctness.

After a newspaper article detailing his behavior with women, Trump kept the story alive by repeatedly bashing the reporters and defending his actions. He shifted the conservation to his possible presidency by announcing a list of judges he might nominate to the high court. He then said on Twitter the roll out went so well that he might add more names.

In between, Trump said he could negotiate with North Korea’s leader. He called Ferguson, Missouri, and Oakland, California, more dangerous than Iraq. And he used the word “rape” in speaking about Bill Clinton’s past indiscretions.

While Clinton’s campaign released paper statements responding to some of Trump’s statements, the candidate herself stayed largely quiet.

Meanwhile, it’s the voters that are responding.