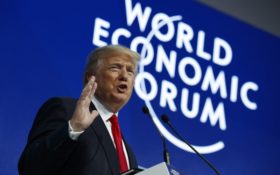 Playing the role of economic cheerleader, President Donald Trump told an annual gathering of political and business elites Friday that America is open for business and that economic growth in the U.S. under his “America first” agenda could benefit the globe.

Trump told the World Economic Forum in Davos that American prosperity has created countless jobs around the world and he made clear he would remain focused on the U.S. economy.

But with a chamber of commerce-style pitch, the businessman-turned-president used the forum to sell the U.S. as a prime place to conduct business, noting the recent passage of a sweeping tax overhaul.

“America is the place to do business. So come to America, where you can innovate, create and build,” Trump said. “I believe in America.”

The president sought to strike a balance, reassurance the business leader-filled and cooperation-minded audience that his “America first” policy “does not mean America alone.”

“When the United States grows, so does the world,” Trump said. “American prosperity has created countless jobs around the globe and the drive for excellence, creativity and innovation in the United States has led to important discoveries that help people everywhere live more prosperous and healthier lives.”

Trumpsaid he had inherited “years of stagnation” in the U.S. but recent economic figures show that U.S. companies and other employers added 2.1 million jobs in 2017.

The free-trade-focused gathering had viewed Trump with skepticism, given his “America First” message, but the White House has insisted that his protectionist policies and international cooperation can go hand-in-hand. Trump was greeted with loud applause when he took the stage.

Trump addressed a crowd of over 1,500 people packed into a high-ceilinged hall in the modern conference center. Anticipation was high from attendees, who had watched the president closely since he arrived, snapping photos when he entered and as he moved from room to room.