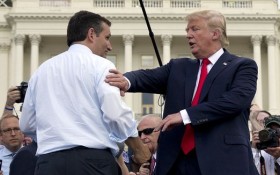 And with that, conservatives’ dream of a Trump-Cruz ticket seems to have gone up in smoke.

Deploying a strategy he has often used to toss out an accusation as media fodder, Trump recently said in a Washington Post interview that “a lot of people are talking about” whether Cruz, who was born in Canada, can serve as president.

And Trump doesn’t believe Cruz’s eligibility issues are going away any time soon, and could dog the candidate for his entire campaign.

Cruz was granted American citizenship at birth because his mother is American. While most legal experts agree that makes Cruz a natural-born citizen, Trump doesn’t appear to see the issue as settled.

Trump alleged that several states are taking a look at Cruz’s citizenship and “the fact that he was born in Canada and he has had a double passport.”

“Republicans are going to have to ask themselves the question: ‘Do we want a candidate who could be tied up in court for two years?’ That’d be a big problem,” Trump told the Post. “It’d be a very precarious one for Republicans because he’d be running and the courts may take a long time to make a decision. You don’t want to be running and have that kind of thing over your head.”

For his part, Cruz tried to laugh off the latest accusations with a tweet referencing a Happy Days episode where the main character Fonzie jumps over a shark. It’s a pop culture reference suggesting that someone’s period of fame is ending — and seemed to be Cruz’s way of accusing Trump of getting desperate.

My response to @realDonaldTrump calling into question my natural-born citizenship? https://t.co/gWfAHznlCY