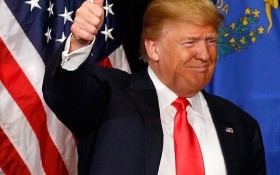 Brash billionaire Donald Trump looks set to cruise to victory in Tuesday’s New Hampshire Republican primary after polls show him continuing to hold his commanding lead in the Granite State. On the Democratic side, Vermont Senator Bernie Sanders is poised to defeat former Secretary of State Hillary Clinton easily.

But the real surprise could come from Ohio Gov. John Kasich.

After languishing in the middle of national polls for months, Kasich’s campaign has suddenly found itself prepared to pull an establishment shake-up. Florida Sen. Marco Rubio’s uneven debate performance just days before Tuesday’s New Hampshire primary has emboldened the governor’s campaign, and recent polls reflect that.

One of Kasich’s key advisers, former New Hampshire Sen. John Sununu, told The Huffington Post on Sunday, “We’ve got a chance — a real chance — to finish second,” and that a strong showing would “carry John into the next round. We are already getting ready for South Carolina.”

Trump has held a commanding double-digit lead in New Hampshire for months, but a recent preference poll by Monmouth University has Kasich suddenly finishing second in the Granite State. Texas Sen. Ted Cruz is in the mix with Rubio, though his campaign is more focused on the Southern states that follow later in the primary calendar.

Rubio emerged from Iowa with a third-place finish that was stronger than expected.

But the Florida senator stumbled in this weekend’s debate when challenged about his qualifications, repeatedly falling back on a retort meant to distinguish himself from President Barack Obama, who also won the White House as a first-term senator. He was savaged by New Jersey Gov. Chris Christie during the debate, broadcast Saturday.

If Christie’s aggressive attacks on Rubio result in his own standing tumbling, it could benefit Kasich, who stepped back in the debate to allow Christie to take the lead in targeting Rubio, though he was happy to relish in the afterglow.

Kasich has prided himself on avoiding direct criticism of his rivals during the campaign, and kept up that strategy both in the debate and as he campaigned Sunday.

“Wouldn’t it be great if we could win being positive?” Kasich said on Fox News.

Seeking to counter the notion of a misstep, Rubio’s campaign said it raised $600,000 during the debate, three times more than it has brought in during previous debates.