Trump condemns “both sides” for political violence - The Horn News 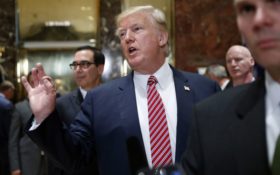 President Donald Trump defiantly blamed “both sides” for the weekend violence between white supremacists and counter-demonstrators in Virginia, drawing attention to what he calls the “alt-left” and the “alt-right.”

And the mainstream media lost it.

Sponsored: How to help reverse age-related vision loss by 82%

Standing in the lobby of Trump Tower, Trump acknowledged that there were “some very bad people” among those who gathered to protest Saturday. But he added: “You also had people that were very fine people, on both sides.”

The rally was organized by white supremacists and other groups under a “Unite the Right” banner. Organizers said they were initially activated by their objections to the removal of a statue of Confederate Gen. Robert E. Lee, but the larger aim was to protest what they saw as an “anti-white” climate in America.

In his remarks, Trump condemned bigoted ideology and called James Alex Fields Jr., who drove his car into a crowd of counter-protester killing a 32-year-old woman, “a disgrace to himself, his family and his country.” But Trump also expressed support for those seeking to maintain the monument to Lee, equating him with some of the nation’s founders who also owned slaves.

“So, this week it’s Robert E. Lee,” he said. “I noticed that Stonewall Jackson’s coming down. I wonder, ‘is it George Washington next week and is it Thomas Jefferson the week after?’ You really do have to ask yourself, where does it stop?”

Once again, the blowback was swift, including from fellow Republicans. Sen. Marco Rubio of Florida said Trump should not allow white supremacists “to share only part of the blame.” House Speaker Paul Ryan declared in a tweet that “white supremacy is repulsive” and there should be “no moral ambiguity,” though he did not specifically address the president.

Other critics noted that some of the president’s comments Tuesday mirrored rhetoric from the far-right fringe. A post Monday by the publisher of The Daily Stormer, a notorious neo-Nazi website, predicted that protesters are going to demand that the Washington Monument be torn down.

Even White House officials were seemingly caught off guard by his remarks Tuesday. He had signed off on a plan to ignore questions from journalists during an event touting infrastructure policies, according to insiders.

As Trump talked, his aides on the sidelines in the lobby stood in silence. Chief of Staff John Kelly crossed his arms and stared down at his shoes, barely glancing at the president. Press Secretary Sarah Huckabee Sanders looked around the room trying to make eye contact with other senior aides.

The mainstream media pounced on the administration, saying that Kelly was brought into the White House less than a month ago to try to bring order and stability to a chaotic West Wing. Some Trump allies hoped the retired Marine general might be able to succeed where others have failed: controlling some of Trump’s impulses.

Democrats were also furious at Trump’s comments. Virginia Sen. Tim Kaine said on Twitter that the Charlottesville violence “was fueled by one side: white supremacists spreading racism, intolerance & intimidation. Those are the facts.”

When asked to explain his Saturday comments about Charlottesville, Trump again read a section of his initial statement that denounced bigotry.

Trump said he had yet to call the mother of crash victim Heather Heyer, but would soon “reach out.” He praised her for what he said was a nice statement about him on social media.