Trump: Changes are coming to the GOP tax bill - The Horn News 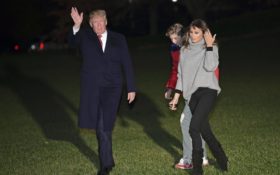 President Donald Trump said Monday changes to the Republican tax bill are coming, as he looks to win over holdout GOP senators in an effort to pass the package by the end of the year.

In a morning tweet, the president said, “With just a few changes, some mathematical, the middle class and job producers can get even more in actual dollars and savings.”

The Tax Cut Bill is coming along very well, great support. With just a few changes, some mathematical, the middle class and job producers can get even more in actual dollars and savings and the pass through provision becomes simpler and really works well!

Trump is suggesting openness to making unspecified changes to the way millions of “pass-through” businesses are taxed, a sticking point for some lawmakers.

Trump and Republicans have set as a vital political goal passage of tax overhaul legislation by the end of the year. The House recently passed a $1.5 trillion bill. Senate GOP leaders hope to muscle their bill through this week. The package blends a sharp reduction in top corporate and business tax rates with more modest relief for individuals.

Trump was set to meet Monday afternoon with five members of the Senate Finance Committee who are on board with the GOP plan. He will travel to Capitol Hill Tuesday to personally lobby Republican senators.

In a boost for GOP efforts, Republican Sen. Rand Paul of Kentucky said he would back the measure.

“I’m not getting everything I want — far from it. But I’ve been immersed in this process. I’ve fought for and received major changes for the better — and I plan to vote for this bill as it stands right now,” Paul wrote in an op-ed on Fox News.

Republicans have no votes to spare in the Senate, where they hold a razor-thin 52-48 edge.

Holdouts include Republican Sen. Susan Collins of Maine, who has objected to a provision in the Senate bill repealing the requirement under the “Obamacare” program that everyone have health insurance. Collins has said that issue should be dealt with separately from the effort to overhaul the tax code.

Sen. Ron Johnson, R-Wis., has already declared his opposition to the bill, saying it doesn’t cut business taxes enough for partnerships and corporations. GOP Sens. Bob Corker of Tennessee, John McCain and Jeff Flake of Arizona also have concerns about the bill and its impact on the nation’s deficit.

Last week Trump promised to “give the American people a huge tax cut for Christmas.”