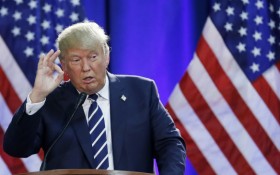 Presidential candidate Donald Trump caved to party pressure and ruled out the prospect of a third-party bid on Thursday, vowing to support whoever wins the GOP’s nomination.

But loyalty is a two-way street. It remains to be seen if Republican mainstream will support Trump — or even wants him in the race.

Trump’s U-turn decision follows weeks of behind-the-scenes efforts by Republican leaders, who’ve been trying to avert the possibility of an independent campaign by Trump ever since last month’s opening debate, when he refused to promise to back the party’s eventual nominee. A third-party bid by Trump, or any prominent conservative, could doom Republican efforts in 2016.

“I will be totally pledging my allegiance to the Republican Party and the conservative principles for which it stands,” Trump said in a news conference at Trump Tower, the gold-hued skyscraper in midtown Manhattan where he launched his surging campaign for president.

The 69-year-old billionaire, who announced his decision after meeting with Republican National Committee Chairman Reince Priebus, insisted he got “absolutely nothing” for pledging his loyalty “other than the assurance that I’ll be treated fairly.”

To the dismay of GOP leaders, Trump has emerged as the overwhelming leader in a crowded field, despite repeatedly insulting key constituencies and offering few details about his policies. The reality television star has described Mexican immigrants as rapists, questioned Sen. John McCain’s war hero status and insulted a popular Fox News host. His refusal during the party’s first debate to pledge his support for the primary campaign winner further roiled the GOP.

Doug Watts, a spokesman for retired surgeon Ben Carson, another GOP candidate, said the committee “felt it had to box Trump into a decision.”