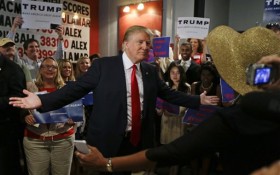 GOP presidential candidate Donald Trump will decide soon whether to mount a third-party bid if he loses the Republican nomination for president, the real estate mogul said Saturday. Once he declares he’ll no longer seek a third-party candidacy, the gloves could come off from party mainliners who are afraid to attack him now.

To appear on the ballot in South Carolina and several other states, Trump has to promise to support the eventual nominee. That means no third-party run.

Trump has so far refused to pledge to support the eventual Republican nominee, saying his refusal to commit gains him leverage over the party establishment, which has been caught off-guard by his early dominance in the race. He’s also said repeatedly that he’d prefer to run as a Republican as long as the party treats him fairly.

This weekend he was busy directly courting Tea Party voters, and addressed when he’ll make a final decision

“I think over the next couple of weeks you’re going to see some things that are very interesting,” Trump said after a speech in Nashville to a gathering of Tea Party activists.

“We’re going to make a decision very soon,” he added, “and I think a lot of people are going to be very happy.”

With more than a year before the presidential election, Trump has been leading summertime polls. The threat of a third-party run has caused many mainline Republicans to avoid direct attacks on Trump. Once he announces his intention to go GOP-or-nothing, Republicans candidates in need of media attention could start ramped up assaults.

It will be up to Trump to weather the storm.