Trump blasts Germany as "captive to Russia" - The Horn News 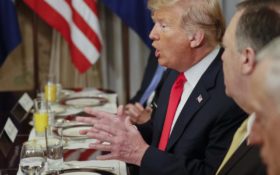 The president said the Germany-Russian pipeline project has allowed the country to be “totally controlled” by and “captive to Russia,” and blasted allies’ defense spending.

Speaking at a breakfast prior to the NATO summit, Trump stated it is not fair to American taxpayers for Germany to buy oil and gas from Russia, all while enjoying the umbrella of defense provided by U.S. dollars.

“I have to say, I think it’s very sad when Germany makes a massive oil and gas deal with Russia where we’re supposed to be guarding against Russia,” Trump said at breakfast with Stoltenberg, pointing out that the country pays “billions and billions of dollars” to Russia for energy.

The president appeared to be referring to the Nord Stream 2 pipeline that would bring gas from Russia to Germany’s northeastern Baltic coast, bypassing Eastern European nations like Poland and Ukraine and doubling the amount of gas Russia can send directly to Germany.

The vast undersea pipeline is opposed by the U.S. and some other EU members, who warn it could give Moscow greater leverage over Western Europe.

Trump repeatedly described Germany as “captive to Russia” and urged NATO to look into the issue. The president highlighted that “Germany is a rich country” and that is is unfair for the U.S. to “protect you against Russia” while both countries are sparking up deals. Germany has been criticized by the White House in recent years for refusing to honor it’s NATO defense spending obligations.

In an attempt to push back against Trump’s claims, German Chancellor Angela Merkel insisted that Germany makes its own decisions.

“I’ve experienced myself a part of Germany controlled by the Soviet Union and I’m very happy today that we are united in freedom as the Federal Republic of Germany and can thus say that we can determine our own policies and make our own decisions and that’s very good,” she said.

In the back-and-forth, Stoltenberg stressed that NATO members have been able to work together despite their differences. “I think that two world wars and the Cold War taught us that we are stronger together than apart,” he told the president, trying to ease tensions.

Trump later tweeted a video of the exchange.

Arkansas Sen. Tom Cotton, a Republican and strong supporter of the president, said the pipeline issue strikes at the “heart of NATO unity.”

“The pipeline gets cheap Russian gas to Germany while bypassing smaller Eastern European nations, allowing Russia to pressure them while Germany is held harmless,” he tweeted, adding: “No amount of preening in Berlin will cover this nakedly selfish policy.”

Nord Stream 2 strikes at heart of NATO unity. The pipeline gets cheap Russian gas to Germany while bypassing smaller Eastern European nations, allowing Russia to pressure them while Germany is held harmless. No amount of preening in Berlin will cover this nakedly selfish policy.

White House press secretary Sarah Huckabee Sanders announced hours after the breakfast over Germany that Trump would meet later Wednesday with Merkel, as well as with French President Emmanuel Macron.