Trump: Ben Carson is a pathological liar! - The Horn News 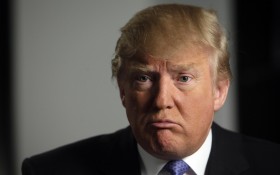 Trump, brushing aside any recent claims of civility, has equated Carson’s childhood “pathological temper” to the illness of a child molester, questioned his religious awakening and berated voters who support the retired neurosurgeon.

The new video continues to question Carson’s account of trying to stab a friend when he was young.

“Violent criminal? Or pathological liar?” it asks. “We don’t need either as president.”

Carson said Trump’s broadside is “expected” in politics, but he decried “the politics of personal destruction.”

“I’m hopeful at some point that we reach a level of maturity that we can actually deal with the issues that are facing us right now and stop getting into the mud and doing things that really don’t matter,” Carson told reporters in South Carolina.

Trump, once the undisputed poll leader, is now running neck-and-neck with Carson in many opinion surveys.

Trump previewed his line of attack in an interview with CNN Thursday in which the businessman pointed to Carson’s own descriptions of his “pathological temper” as a young man.

In his book “Gifted Hands,” Carson described the uncontrollable anger he felt at times while growing up in inner-city Detroit. He wrote that on one occasion he nearly punched his mother and on another he attempted to stab a friend with a knife.

“I had what I only can label a pathological temper — a disease — and this sickness controlled me, making me totally irrational,” Carson said, in describing the incident with his mother. He referred to “pathological anger” again in telling about lunging at his friend, a knife blade breaking off when it hit the boy’s belt buckle.

During the rally Thursday night in Fort Dodge, Iowa, Trump said that Carson is “an enigma to me.”

He went on to repeat the molestation analogy with his comments about pathological temper, and he questioned aspects of Carson’s biography. At one point, Trump acted out the scene of Carson trying to stab his friend, lurching forward dramatically. “He lunged that knife into the stomach of his friend, but, lo and behold, it hit the belt!” Trump declared.

In “Gifted Hands,” Carson describes racing to the bathroom in his house after the near-stabbing incident — and in time beginning to pray for God’s help in dealing with his temper.

“During those hours alone in the bathroom, something happened to me,” he wrote. “God heard my deep cries of anguish. A feeling of lightness flowed over me, and I knew a change of heart had taken place. I felt different. I was different.”

In questioning Carson’s religious awakening, Trump said in Fort Dodge that Carson went into the bathroom and came out, “and now he’s religious.”