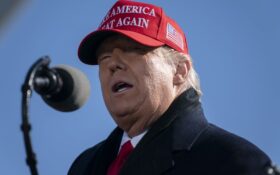 Former President Donald Trump started the social media website Truth Social after his ban from Twitter last year, and he’s been using the application more and more often in the run-up to this year’s midterm elections.

Still, Trump remains embroiled in a feud with Big Tech, according to a bombshell report from Axios.

As of Tuesday, the Google Play Store has barred the Truth Social application from being downloaded by Android users — which represents 44 percent of all smartphone users. Google claimed it was over moderation concerns.

“On Aug. 19, we notified Truth Social of several violations of standard policies in their current app submission and reiterated that having effective systems for moderating user-generated content is a condition of our terms of service for any app to go live on Google Play,” a Google spokesman reportedly told CNBC in a statement Tuesday.

To access Truth Social, Android users must use a browser rather than simply downloading a Truth Social app from the app store.

Contrary to some reports, however, Trump has not been directly “banned from Google Play.” Truth Social remains accessible for the millions of Americans with Androids… but it sits behind some serious hurdles.

Some staff members of Truth Social have expressed frustration with Google.

Devin Nunes, who left Congress last year to become CEO of Trump’s company, spoke to Axios about the issue.

“I don’t know what’s taking them so long,” Nunes said. He described the final decision as “up to Google.”

Google has feuded with Trump in the past. Last year, the company terminated his account and banned him from YouTube, one of its subsidiaries.

Truth Social launched its iPhone app in February. Since then, the site has attracted conservative activists as well as politicians like Sens. Marco Rubio, R-Fla., and James Lankford, R-Okla, but still represents only a small fraction of social media web traffic.