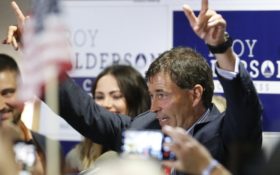 High-stakes elections on Tuesday that included Donald Trump-backed candidates resulted in a pair of big wins for the president — and experts see it as proof that the so-called 2018 “blue wave” was going to fizzle.

In Ohio, the script for the special election was somewhat familiar: An experienced Trump loyalist, Balderson, was fighting a fresh-faced Democrat, Danny O’Connor, in a congressional district held by the Republican Party for more than three decades. O’Connor lost.

In Kansas, Republicans were fighting among themselves in a battle for governor in which the president sided with the incumbent’s challenger. Baring a recount, Kobach’s win is a signal that Trump remains the leader of the Republican party heading into 2018.

He made a surprise endorsement on the eve of the election —

Kris Kobach, a strong and early supporter of mine, is running for Governor of the Great State of Kansas. He is a fantastic guy who loves his State and our Country – he will be a GREAT Governor and has my full & total Endorsement! Strong on Crime, Border & Military. VOTE TUESDAY!

In Ohio, as voters were going to the polls, Trump also expressed that Balderson would make a “great congressman.”

Balderson will take the seat previously held by Pat Tiberi, a nine-term incumbent who resigned to take a job with an Ohio business group.

Balderson and O’Connor will reprise their race in the general election in just three months. There are at least 3,367 provisional ballots left to be reviewed; while a sudden Democratic upset is possible, it remains unlikely.

Trump won Ohio’s 12th Congressional District by more than 11 points in 2016; on Tuesday night, Balderson and O’Connor were separated by less than 1 point.

Democrats continue to suggest that there will be a ‘blue wave’ hitting America in November, but voting results don’t lie — and it looks like liberals are in for a surprise when a ‘red wave’ smacks them in the face this fall.