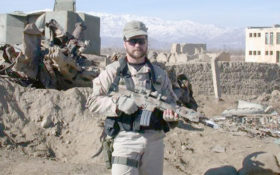 President Donald Trump will award the Medal of Honor to an Air Force Sergeant credited with saving the lives of his fellow service members on a mountain in Afghanistan in 2002.

Trump will present the award posthumously to the family of Technical Sergeant John A. Chapman, a native of Windsor Locks, Connecticut. Chapman will be the first airman to receive the award since the Vietnam War.

The White House says Chapman “charged into enemy fire through harrowing conditions,” seized a bunker and killed its occupants. In an ensuing firefight, he was severely wounded but continued to fight until he was killed.

Navy Petty Officer 1st Class Neil C. Roberts fell from a damaged helicopter onto the snowy mountain — and Chapman and his team made the fateful decision on another aircraft and save the wounded comrade.

Chapman knew Al Qaeda terrorists were closing in, but he “charged into enemy fire through harrowing conditions,” and went on to seize a bunker and kill its occupants, according to the White House.

Chapman was seriously wounded during the fight, but continued his heroic duties until he was killed.

In 2002, Chapman was awarded posthumously the Air Force Cross for climbing up the steep hill and killing the militants entrenched inside the bunker.

But, former Air Force Secretary Deborah James recommended his award be upgraded to the Medal of Honor after further examination of the drone video footage from the attack. Trump approved the request.