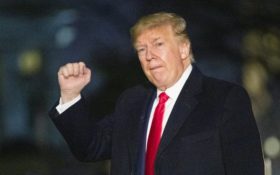 The White House says President Donald Trump will become the first president to attend the annual anti-abortion march in Washington called the March for Life.

Heading towards the 2020 election, Trump has made it a priority to embrace social conservatives, particularly on the issue of abortion. In past years, he has sent members of his administration to speak at the march and has spoken via a video link. He’s going in-person to this week’s event.

“See you on Friday … Big Crowd!” Trump tweeted Wednesday as he returned to the White House after a trip to Switzerland.

“We are so excited for him to experience in person how passionate our marchers are about life and protecting the unborn,” said Jeanne Mancini, president of March for Life.

This year’s rally comes just weeks before the U.S. Supreme Court hears its first major abortion case since the addition of two justices appointed by Trump.

The case is likely to reveal whether the court — more conservative since the arrival of Justices Neil Gorsuch and Brett Kavanaugh — is now willing to weaken the 1973 Roe v. Wade decision that established a nationwide right to abortion.