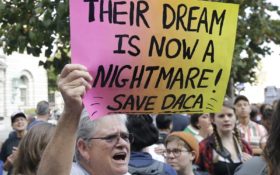 The Trump administration will try to convince a U.S. appeals court Tuesday that it was justified in ending an Obama-era immigration policy that shielded hundreds of thousands of young immigrants from deportation.

The 9th U.S. Circuit Court of Appeals will be the first federal appeals court to hear arguments about President Donald Trump’s decision to phase out the Deferred Action for Childhood Arrivals program.

DACA has protected some 700,000 people who were brought to the U.S. illegally as children or came with families that overstayed visas.

A federal judge in San Francisco in January blocked the Trump administration’s decision to end DACA, reinstating the program in a decision that applied nationwide.

U.S. District Judge William Alsup rejected the argument that President Barack Obama exceeded his power in implementing DACA and said the Trump administration failed to consider the disruption that ending the program would cause.

“This has become an important program for DACA recipients and their families, the employers who hire them, for our tax treasuries, and for our economy,” the judge said.

The Trump administration said it was forced to act because Texas and other states threatened to sue, raising the prospect of a chaotic end to the program.

It wants the 9th Circuit to throw out Alsup’s ruling along with the five lawsuits he considered, including one by the state of California and another by the University of California’s governing body.

“The rescission of DACA is based on what appears to be an argument that DACA was illegal when it was enacted, but that’s just wrong,” Jeff Davidson, an attorney representing UC regents, said on a recent conference call with reporters.

Federal judges in New York and Washington, D.C., also have ruled against the Trump administration on DACA. The 2nd U.S. Circuit Court of Appeals is expected to hear arguments this summer on an appeal of the New York judge’s ruling.

The DACA decision appears likely to end up before the U.S. Supreme Court eventually.

The administration has been critical of the 9th Circuit and took the unusual step of trying to sidestep the appeals court and have the California DACA cases heard directly by the Supreme Court.

The high court in February declined to do so.

The 9th Circuit has ruled against Trump’s travel bans and is also considering the president’s executive order to cut off funding from so-called sanctuary cities that limit cooperation with federal immigration authorities. Trump has said he has considered breaking up the court, which is widely considered the most liberal of the U.S. appeals courts.