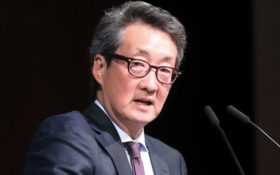 South Korea on Thursday downplayed media reports that the U.S. might have reconsidered its choice to be ambassador to Seoul because the prominent Washington-based scholar didn’t endorse the idea of military action against North Korea.

He tried to downplay recent media reports as “mainly speculation.” A Washington Post report Tuesday said Cha had privately expressed disagreement in late December with the Trump administration’s policy on North Korea and on a U.S.-South Korea trade pact that Trump has threatened to scrap.

“What’s clear is that there is no difference in opinion between the South Korean and U.S. governments over North Korea polices and that the countries are closely discussing and cooperating on that front,” said Noh.

The high-profile diplomatic post in Seoul has been vacant since Trump took office a year ago.

The Washington Post’s article came shortly before President Donald Trump delivered his State of the Union address where he said North Korea’s “reckless pursuit of nuclear missiles could very soon threaten our homeland.” He said the U.S. was waging a “maximum pressure” campaign to prevent that — referring to the international effort to deepen the North’s economic and diplomatic isolation through sanctions.

About Trump’s address, Noh said that Washington and Seoul share a view that all diplomatic options, including sanctions and pressure, must be used to drag North Korea into talks for eliminating its nuclear weapons program.

Cha, who is Korean-American, has written books on North Korea. During the Bush administration, he conducted nuclear negotiations with Pyongyang. He currently holds senior positions at the School of Foreign Service at Georgetown University and the Center for Strategic and International Studies think tank.

The previous ambassador, Mark Lippert, was a political appointee of President Barack Obama and vacated the post as soon as Trump took office. The embassy in Seoul is currently led by the charge d’affaires, Marc Knapper, a career diplomat.