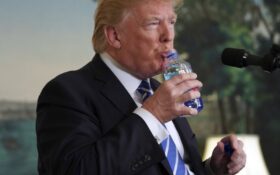 The subpoena was issued last week in an extraordinary escalation of the committee’s politically motivated effort to investigate the former president’s role in the riot at the U.S. Capitol on Jan. 6.

The nine-member panel, made up of seven Democrats and two Republican lawmakers, issued a letter to Trump’s lawyers demanding he testify, either at the Capitol or by videoconference, “beginning on or about” Nov. 14 and continuing for multiple days if necessary.

The letter also outlined a sweeping request for documents, including personal communications between Trump and members of Congress as well as extremist groups. Those are to be turned in by Nov. 4, although the committee’s deadlines are generally subject to negotiation.

Accepting the subpoena means Trump and his legal team must now settle their response to the committee, but that does not mean Trump will cooperate.

According to The Guardian —

Trump has several options to consider, which range from total noncompliance to some cooperation as he weighs whether to respond to the select committee’s subpoena, according to sources familiar with recent discussions circulating around the former president and various lawyers and advisers.

The noncompliance option revolves around the calculation that the subpoena essentially lacks teeth and is probably legally unenforceable, meaning he could simply decide to ignore the summons in its entirety.

Among other things, the sources said, the justice department’s internal opinions about current and former presidents having absolute immunity from testifying to Congress would suggest that Trump would not be prosecuted even if the select committee referred him for contempt of Congress.

The former president’s advisers have noticed, for instance, that the justice department declined to charge senior Trump White House official Dan Scavino with contempt after he refused to cooperate – and if that was the case for an adviser, it would naturally extend to the principal.

It is unclear how Trump and his legal team will respond now that it has formally accepted the subpoena.

“We understand that, once again, flouting norms and appropriate and customary process, the Committee has publicly released a copy of its subpoena,” David Warrington, a partner with the Dhillon Law Group, which is representing Trump, said in a statement last week. “As with any similar matter, we will review and analyze it, and will respond as appropriate to this unprecedented action.”

In the letter, the Democrat-led committee wrote about the “overwhelming evidence” it has assembled, showing Trump “personally orchestrated” an effort to overturn his defeat in the 2020 election, including by spreading false allegations of widespread voter fraud, “attempting to corrupt” the Justice Department and pressuring state officials, members of Congress and his own vice president to change the results.

“In short, you were at the center of the first and only effort by any U.S. President to overturn an election and obstruct the peaceful transition of power, ultimately culminating in a bloody attack on our own Capitol and on the Congress itself,” the committee said.

Experts say there remains little legal advantage for Trump to cooperate with the committee as he already faces other civil and criminal legal battles in various jurisdictions, including over his family business in New York and the handling of presidential records at his Mar-a-Lago estate in Florida.

It’s likely his lawyers could simply run out the clock on the subpoena by going to court to try to squash it as the committee is required to finish its work by the end of the year.

“It seems improbable to me that this could be litigated to conclusion in the time remaining to the Committee in this Congress,” Peter Keisler, who served as acting attorney general under President George W. Bush, told The Associated Press last Friday.