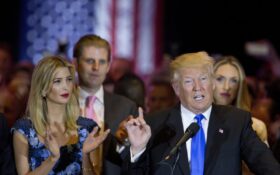 Even as President Donald Trump and Democratic presidential candidate Joe Biden battle it out in court over the results of the 2020 presidential election, the Trump family is eyeing up another opportunity.

If Trump should lose his legal cases against Biden and the results are certified as they stand, the family could return to Capitol Hill as soon as 2022.

Not as the president. As a senator.

Sen. Richard Burr, R-N.C., does not plan to run for reelection in 2022, leaving a Republican-friendly seat up for grabs. According to insiders, Lara Trump is “interested and exploring” a potential run for the seat.

“The president gave her the responsibility of winning North Carolina in 2016 and in 2020 — and she did it both times,” the person told Fox News. Lara Trump is a “household name” in the state and “well-known among the Republican Party.”

If she ran for Burr’s vacant seat, she’d be considered the immediate frontrunner.

The Trump family isn’t the only Republican household name eyeing up the potential open seat. According to reports, Chief of Staff Mark Meadows is also considering a run in the state.

Lara Trump or Mark Meadows? Share your thoughts on the potential matchup below —