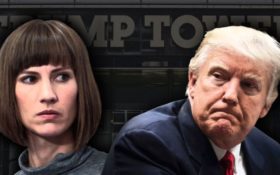 President Donald Trump is lashing out at a woman who claims, without evidence, that he once forcibly kissed her and said it “Never happened!”

An Ohio woman has claimed that Trump stole an unwelcome kiss from her in the lobby of Trump Tower 13 years ago. Trump has called this claim more fake news.

Rachel Crooks shared her story to The Washington Post recently, and it was published Tuesday on the front page. What she said was disturbing… if it’s true.

Trump responded to the allegations with disgust, saying that he has no recollection of ever meeting Crooks.

A woman I don’t know and, to the best of my knowledge, never met, is on the FRONT PAGE of the Fake News Washington Post saying I kissed her (for two minutes yet) in the lobby of Trump Tower 12 years ago. Never happened! Who would do this in a public space with live security……

….cameras running. Another False Accusation. Why doesn’t @washingtonpost report the story of the women taking money to make up stories about me? One had her home mortgage paid off. Only @FoxNews so reported…doesn’t fit the Mainstream Media narrative.

Trump asks why The Post has refused to print a “report the story of the women taking money to make up stories about me?”

The president is referring to contact lawyer Lisa Bloom, who accepted hundreds of thousands of dollars from political donors to find new accusers. Bloom also admitted that she connected one of the accusers to a donor that paid off her mortgage after she accused Trump of sexual misconduct, according to Snopes.

Now running for office as a Democrat in Ohio, Crooks does not plan on backing down from her allegations anytime soon. She plans to continue to share her story in hopes of speaking out on the “character” of the president.

Sponsored: Worried About Alzheimer’s? Don’t do this in bed

In the meantime, we will sit back and wait for this aspiring politician’s proof of the alleged encounter with Trump.