When a trucker suddenly pulled off the road, no one expected THIS... - The Horn News 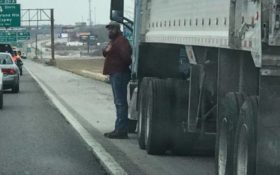 One trucker has just melted the hearts of every American after a photo of his pulled-over truck was published on Facebook.

The trucker, Bradley Faulkner, pulled onto the side of the highway and go out of his truck to place his hand on his heart. Why?

Kristen Collins, the woman who posted the photo, posted a brief caption to explain what exactly happened.

“While in the funeral procession today to Jefferson barracks to lay my grandfather to rest a man driving a truck pulled off and made honor as we all proceeded. Thank you for showing such great honor – I found and got to personally thank this man!!” said Collins.

Faulkner is a true American.

He comes from a military family, and is even a nine year veteran who served in Iraq.

“For that moment, everything about my grandfather  about his legacy and life was important,” Collins explained to WMAZ news.

In hopes of finding this mystery trucker, Collins posted the photo to Facebook.

As luck would have it, hundreds of people shared her post and Collins was able to track down Faulkner. These two strangers met up in person so Collins could finally thank him.

“Can I give you a hug please?” she asked Faulkner.

“It doesn’t change or alter your life at all to maybe lift up that one family and say, ‘Hey, in your time of need, I’m here for you whether I know you or not,’” explained Faulkner.

“It’s just such an honor to be able to meet the person that made such an impact on us for a moment in time,” Collins stated.

In a world that has been full of negative and hateful drama lately, it is nice to hear a heartwarming story that truly show the respect and love for life we should all have.

Faulkner is a patriot for his country, and for that, we honor you.