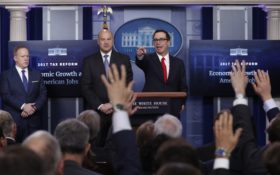 White House Treasury Secretary Steve Mnuchin released a one-page proposal Wednesday, outlining President Donald Trump’s tax plan, and it has something for everyone.

Massive tax cuts for businesses and a bigger standard tax deduction for middle-income families, lower investment taxes for the wealthy, and an end to the federal estate tax for the superrich.

Experts claim the proposal is good news for seniors – specifically anyone on the receiving end of Medicare and Social Security. It is expected that little changes will be made to either program, which is supported by Trump’s previous rhetoric.

In his first speech to a joint session of Congress in February, Trump promised “no changes” to Social Security and Medicare when discussing his tax plan blueprint. Mnuchin has reiterated that vow, saying that big social welfare programs like social security and medicare will be spared from the massive tax cuts proposed.

The changes to the tax code are the most concrete guidance so far on Trump’s vision for spurring job growth and fulfilling his promise to help workers who have been left behind by an increasingly globalized economy.

“He understands that there are a lot people who work hard and feel like they’re not getting ahead,” said Gary Cohn, director of the White House National Economic Council.

Treasury Secretary Steve Mnuchin said of the tax: “We don’t think it works in its current form.” He did say the administration would work with House Republicans to make the new tax more acceptable.

“We’ve been briefed on what they’re going to do and it’s basically along exactly the same lines that we want to go, so we see this as progress being made,” House Speaker Paul Ryan said. “We’re moving and getting on the same page.”

The administration wants to reduce the number of tax brackets to three from seven, but it has yet to determine the income levels for people who would be put in each bracket. The top income tax rate would be reduced from 39.6 percent to 35 percent.

“We will be back to you with very firm details,” Cohn said.

About 70 percent of taxpayers take the standard tax deduction when they file their taxes. Trump’s plan would double it to $24,000 for married couples, which could provide significant tax cuts for low-and middle-income families.

While this is still a brief proposal awaiting further detail, it gives everyday Americans hope that Trump is standing by his campaign promises and working to ensure all U.S. citizens have the ability to thrive and carryout the American dream.