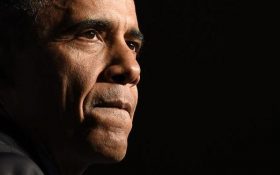 Critics protested against President Barack Obama’s 2015 nuclear deal with Iran, warning that Obama’s actions were making the world less safe — and the presidents overaggressive push to quickly force the deal through our legal system was unacceptable.

Now, a shocking new report has revealed a secret deal that Obama conspired with world leaders to make — one that allowed loopholes for the Ayatollah and his goons to gain extended access to unacceptable amounts of potentially weapons grade uranium.

This isn’t the stuff of conspiracy blogs and spy fiction. It’s very real — in fact, this news first came straight from Reuters, a liberal-leaning news agency.

The shocking new report, to be published by the Institute for Science and International Security on Thursday, claims that Obama worked out an undisclosed deal with international partners to give Iran exceptions to the nuclear deal’s restrictions.

“The exemptions or loopholes are happening in secret, and it appears that they favor Iran,” David Albright, a former U.N. weapons inspector and president of the Washington-based think tank, said.

“Among the exemptions were two that allowed Iran to exceed the deal’s limits on how much low-enriched uranium (LEU) it can keep in its nuclear facilities, the report said. LEU can be purified into highly enriched, weapons-grade uranium,” the Reuters report says. “The exemptions, the report said, were approved by the joint commission the deal created to oversee implementation of the accord. The commission is comprised of the United States and its negotiating partners — called the P5+1 — and Iran.”

Did you know you can actually starve cancer cells to death?

An unidentified White House official denied that these uranium loopholes were secret, and the report says the administration informed Congress of the exemptions on Jan. 16th.

According to Reuters, however, “Albright said the exemptions, which have not been made public, were detailed in confidential documents sent to Capitol Hill that day — after the exemptions had already been granted”

If the Obama administration is guilty of intentionally deceiving Congress and lying to the American people about his intentions with the Iran deal — if it was secretly arranged to give a known terror sponsor extended access to large amounts of uranium that could be made weapons-grade — then the president’s actions border on treason.