Traitor! US Navy officer accused of espionage - The Horn News 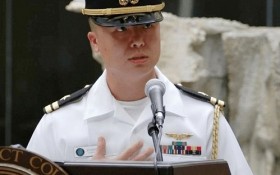 U.S. defense officials say a Navy officer with access to classified information is accused of passing military secrets to China or Taiwan, or both.

A document that describes multiple charges against Lt. Cmdr. Edward C. Lin accuses him of failing to report foreign contacts and says that on multiple occasions he gave or attempted to give secret national defense information to representatives of a foreign government. He is in pretrial confinement.

Uncensored portions of the charge sheet do not identify whom he is accused of spying for. Three U.S. officials said the countries involved are China or Taiwan, and possibly both.

A military hearing was held in Norfolk, Virginia last Friday. A Navy admiral must decide whether there is enough evidence against Lin to pursue a court martial.