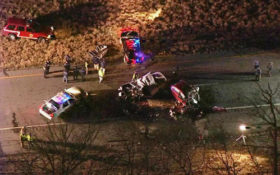 A New Jersey state trooper and another man were killed in a head-on highway crash.

It happened around 7 p.m. Monday on State Route 55 in Millville, in the southern part of the state.

A man traveling southbound in his Toyota Corolla crossed the grass median, entered the northbound lanes and crashed head-on into a marked state police vehicle. Trooper Frankie Williams was on duty and responding to a call at the time of the collision, state police said in a statement early Tuesday.

State police said Williams, of Atlantic County, was a member of the 156th State Police Class, which graduated January 29, 2016. He was assigned to Port Norris Station.

No other information was immediately available.