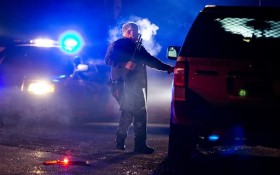 Family members say a Marine veteran was trying to stop a man from robbing a bar in Philadelphia when he was shot and killed.

Michele Gordon says her cousin, 47-year-old Howard White, was killed outside the bar in the city’s Olney neighborhood early Thursday.

Police say White talked the man into leaving the bar, but the man then shot White in the head and torso during an argument.

Police say the suspect fled and broke into a nearby home, where he was subdued by a father and son until police arrived.

Sponsored: Make sure you aren’t eating THIS deadly food on July 4th

The suspect and the father are being treated at a local hospital.

White’s friend, Dwayne Peel, tells KYW-TV that White grew up in north Philadelphia and was a career military man disabled in an explosion while serving.