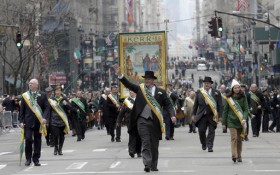 An estimated 125,000 visitors are joining hundreds of thousands of locals at Thursday’s two-hour parade down O’Connell Street to St. Patrick’s Cathedral in central Dublin.

In his St. Patrick’s message the leader of Ireland’s 4 million Catholics, Archbishop Eamon Martin, called on the faithful to pray for Europe to provide a better home for people fleeing war and poverty.

Martin described Patrick — a Briton originally brought to Ireland as a slave, who returned to spread Christianity across the pagan island — as an undocumented migrant, too. “I ask you to pray for refugees and for all displaced families,” Martin said.