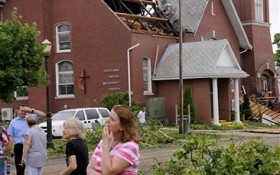 Suspected tornados tied to a vast winter storm system dumping snow and sleet around the East Coast have turned several homes to rubble in parts of the South. More snow and sleet fell around the Northeast early Tuesday while some Western states braced for another day of record warm temperatures.

There were no immediate reports of any deaths or serious injuries from the apparent twisters though witnesses said one 94-year-old woman had to be pulled from under storm debris in one Florida Panhandle community on Monday. State Police in Virginia reported at least three traffic fatalities and urged motorists to stay off roads early Tuesday slickened by snow and sleet.

The suspected tornadoes touched down Monday in the northwest corner of Florida’s Panhandle and in Mississippi, destroying more than a dozen homes, damaging a school while it was in session and trapping the elderly woman, authorities and witnesses said.

Those storms spun off of a vast system that clobbered large areas of the East Coast with more sleet and snow, sending temperatures plunging in the Northeast. In the West, both Arizona and California basked in record-high temperatures in the high 80s and low 90s at the outset of the week.

Officials in Florida and Mississippi were investigating reports of at least three possible tornadoes. One of the apparent twisters swept through Century, a rural town in the northwest Florida Panhandle, destroying or significantly damaging about 10 homes, Escambia County spokeswoman Joy Tsubooka said.

Donald Pugh was at home in Century when the funnel tore through his neighborhood of small wood-frame houses and mobile homes, downing trees and power lines. Pugh told The Associated Press that he and other neighbors used a chain saw to free a 94-year-old woman from the debris of her home.

“It took us quite a while,” he said, adding she was trapped under a twisted metal door. The woman talked to the men as they worked to free her. “She was telling us where she was and that she was OK,” Pugh added.

She appeared to have minor injuries, but was taken to a hospital as a precaution because of her age, authorities said.

Escambia County Administrator Jack Brown said search crews checked through debris for hours afterward as a precaution but there were no later reports of any others found in the rubble.

In Mississippi, windows were blown out of cars and two gymnasiums and a library were damaged at a K-12 school in Wesson where children were in attendance when heavy thunderstorms and a possible tornado crossed at least 19 counties. There were no reports of any students injured, said Mississippi Department of Education spokeswoman Patrice Guilfoyle. Emergency management officials reported at least 15 buildings and homes damaged or destroyed.

Elsewhere on the East Coast, National Weather Service meteorologist Bruce Sullivan said there could be 4 to 8 inches of snow in eastern Ohio, western Pennsylvania and western New York before the storm cleared out.

Many also were shivering through bitter cold. In several Northeastern cities — including New York, Boston and Hartford, Connecticut — temperatures on Sunday dipped below zero, falling to minus 40 on Mount Washington in New Hampshire.

The National Weather Service said many in Vermont, New Hampshire and Maine faced a tough morning commute back to work after the long holiday weekend. A winter weather advisory remained in effect through midday Tuesday across much of northern New England amid forecasts that snow would turn to sleet and freezing rain in some areas.

In the West, Arizona and California were baking in the heat: It was 89 in downtown Los Angeles, breaking 1977’s record of 88. The National Weather Service forecasted Phoenix would have highs of 89 on Tuesday and 92 on Wednesday, above the previous records of 84 and 88 degrees, respectively.

In Phoenix, Arizona, the fire department went so far as to issue safety tips for hot weather — such as not leaving children or pets unattended in vehicles, staying hydrated, and scheduling outdoor activities during the cooler hours of the morning and evening.