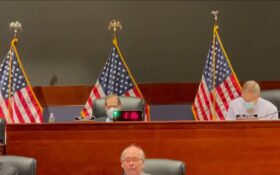 Rep. Jerry Nadler, a 74-year-old Democratic Party leader from New York, appeared to be sleeping during a congressional hearing on Thursday, according to video tweeted by another congressmember.

The tweet said, “@JerryNalder is sleeping on the job… again.” The video showed his eyes closed for more than 10 seconds.

The Republicans on the House Judiciary Committee quote-tweeted the video, and they added the caption, “Maybe this is why he wouldn’t let us play our video.”

It was a reference to the Thursday footage of Nadler fighting with Rep. Jim Jordan, R-O.H., over a different video.

Watch the footage of Nadler’s catnap below —

On Thursday, the congressional judiciary committee was investigating school boards that use threats to intimidate parents into silence, and Jordan wanted to play a video of some parents speaking at board meetings.

However, Nadler said that the previous chairman, a Republican, established a rule requiring 48 hours’ notice for introducing new videos into a hearing, in order to avoid technical issues.

Nadler, as chair of the committee, used this parliamentary procedure to block Jordan’s video.

Nadler said, “An objection has been heard. The video will not be shown.”

Nadler has faced previous criticisms for allegedly napping in Congress. In 2019, he appeared to doze off during Trump’s first impeachment.

Jerry Nadler is falling asleep in his own impeachment hearing… pic.twitter.com/mHzzsG0Dmj