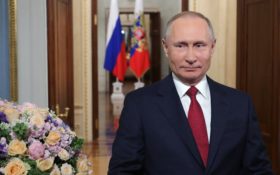 The bloody invasion of Ukraine has stretched into its ninth day as Russian troops slowly make their way across the country, facing heavy resistance, shocking losses, and supply troubles.

While the Russian military is expected to ultimately prevail in the open war stage of the invasion, not everyone in Russian dictator Vladimir Putin’s inner circle is happy.

Andrey Kortunov, the director general of the Russian International Affairs Council that advises the Kremlin, also called for a ceasefire between Russian and Ukrainian forces this week.

He told Sky News that he “cannot comprehend” the carnage being unleashed in Eastern Europe and said “many of us are depressed” about the “embarrassing” invasion debacle.

“I was shocked because for a long time, I thought that a military operation was not feasible. It was not plausible,” Kortunov told Sky News.

“My advice today, given the current situation on the ground, would be to turn a ceasefire into the top priority,” he said. “We have to stop the conflict.”

“You know, it’s something that we should never forget.”

His statement was an extraordinarily strong public rebuke of Putin and may represent cracks in the Kremlin’s hold on Russia’s elite. According to a recent law passed to crack down on Kremlin critics in Russia, a Russian could face jail time even for calling the Ukrainian invasion a “war.”

Despite anti-war protests in Moscow and St. Petersburg, suffering and low morale among his troops, and increasingly harsh sanctions against his country, Putin has vowed to press his war and “demilitarize” Ukraine.

The Associated Press reported that delegates from Ukraine and Russia met in Belarus on Thursday and agreed on humanitarian corridors that would allow civilians to flee safely and allow for humanitarian supplies to be delivered — but made little headway on ending the fighting.

A third round of direct talks are planned for early next week.

In a call initiated by Putin, he told French President Emmanuel Macron that negotiations must center on the “neutralization and disarmament of Ukraine,” according to a French official. Macron “spoke the truth” to Putin, advising him of the long-term consequences and telling him he would end up isolated.