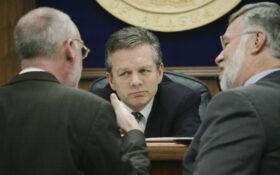 Ben Stevens, a former Alaska Senate president and a son of the late U.S. Sen. Ted Stevens, has died. He was 63.

The Alaska State Troopers said they responded to a report Thursday evening of a hiker having a medical emergency on the Lost Lake Trail near Seward. The hiker was later identified as Stevens, the troopers said. The troopers’ statement said a medical service reached the scene around 6:40 p.m. and that lifesaving measures were unsuccessful.

Erec Isaacson, president of ConocoPhillips Alaska, where Stevens worked as vice president of external affairs and transportation, said in a statement Friday that the company was “deeply saddened by the sudden passing of our friend and colleague, Ben Stevens.”

Stevens joined the company in early 2021 after two years on staff for Republican Gov. Mike Dunleavy. From the beginning of Dunleavy’s tenure as governor, Stevens served as an advisor on legislation, transportation and fishing. In July 2019, Stevens became Dunleavy’s chief of staff in July 2019.

“I will always cherish the time he was my Chief of Staff; his knowledge and political acumen were significant assets in my administration,” Dunleavy said on social media

Devastated to learn of the sudden death of Ben Stevens. His was a kind and generous mentor who I will deeply miss

He challenged me, supported me and was always approached a problem with a calm wisdom

He loved #Alaska and this vast land feels empty without him a text away pic.twitter.com/XlDO43iVSb

Ted Stevens, who died from a plane crash in 2010, was a Republican U.S. senator for Alaska for 40 years.

Ben Stevens, a Republican, joined the state Senate in 2001. He was appointed there by Democrat Gov. Tony Knowles after being nominated by the Alaska Republican Party.

Stevens became Senate president in 2005. Then in 2006, his office was among at least six state legislative offices raided by federal agents as part of a corruption probe. He denied any wrongdoing, but he declined to seek reelection that year, amid both the corruption probe and a blue wave across Alaska’s state Senate. The Republicans experienced a 15 percent loss in the state Senate that year.

Still, Stevens was never charged with a crime, and he remained active on policy matters.

Former Alaska Gov. Bill Walker, an independent, on social media said he had spent time twice this week with Stevens and that the news of his unexpected death was “surreal.”

Members of Alaska’s congressional delegation called Stevens a friend. U.S. Rep. Mary Peltola, a Democrat whose time in the state Legislature overlapped with Stevens’, said Alaska has lost a “great leader who worked tirelessly for our entire state.”

Alaska Senate Minority Leader Tom Begich — a member of another political dynasty — said there were times that he and Stevens agreed on policy and times that they sparred.

Stevens “was a bulldog, but when it came down to it, we always had the ability to work with one another to determine how best to move this great state forward. Ben helped shape Alaska as Chief of Staff to the Governor, as Senate President, as an activist and as an Alaskan,” Begich, an Anchorage Democrat, said in a statement.

State Senate President Peter Micciche, a Republican, said “politics and a fierce commitment to serving Alaska was in Ben’s blood.”

Stevens is survived by his wife, Elizabeth, and their children.

Ben Stevens was a good friend of mine. I will always cherish the time he was my Chief of Staff; his knowledge and political acumen were significant assets in my administration. Rose and I offer our prayers to Ben’s wife, Elizabeth, and the kids during this difficult time.

Ben’s unexpected passing will be felt across all of Alaska. He was a friend of mine and a valued leader of our state. I’m glad to have just had lunch with Ben on Wednesday. I will cherish that time with him.https://t.co/t9AOQdCSaN

Ben was a friend of mine, a great dad and husband, and one who made Alaska a better place for us all. His sudden passing leaves a hole in our Alaskan fabric. Ben Stevens will be be genuinely missed. (2/2)