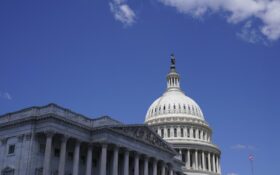 President Joe Biden has been presiding over a humanitarian crisis at the U.S.-Mexico border and an opioid problem at home. Last year, 107,000 Americans died of overdoses, with 71,000 of them overdosing on fentanyl, in particular.

Amid the border disaster, one top congressman has promised to start impeaching Homeland Security Secretary Alejandro Mayorkas… and this U.S. congressman is eyeing Biden, too.

Rep. Ronny Jackson, R-Texas, was asked Sunday whether he planned to impeach Mayorkas.

“We’ve partnered with Mexico and Guatemala to tackle the criminal smuggling networks preying on immigrants. Those efforts have already resulted in thousands of arrests because of the work that this President has done. He bought 20 leaders together to collaboratively manage the immigration challenge impacting the whole western hemisphere, and we’re stopping fentanyl before it even makes it to the streets of the United States.” Jean-Pierre said at a press conference Tuesday.

Jackson, a member of the House Foreign Affairs Committee, accused Jean-Pierre of downplaying the fentanyl crisis.

“That is absolute garbage,” Jackson said Sunday on Fox News, in response to Jean-Pierre. “Tell that to 100,000 families that lost a loved one this year because of the fentanyl crisis.”

“We have to have a commander in chief, a head of state that’s actually going to do something about this,” Jackson continued. “We need somebody in the White House who’s going to work across borders — with the Mexican government, with the Chinese government — to stop the fentanyl from coming in and to go after these cartels on Mexican soil if we need to. Go after their labs, their routes. Go after their vehicles. Go after all the logistical support they have in place.”

Jackson laid the blame not only with Mayorkas, but also with Biden himself.

“This could not be happening without Biden,” Jackson said. “The hundreds of thousands of people that are dying every year because of fentanyl overdoses in this country, I’ll hang that around Biden and Mayorkas, around their neck.”

The Department of Homeland Security has recently seen a change in leadership. Chris Magnus — Customs and Border Protection head — resigned earlier this month, leaving Deputy Commissioner Troy A. Miller to succeed him as acting commissioner.

The White House is sticking to its border “plan” despite CBP’s change in leadership. Jean-Pierre reiterated, “We feel that we have a plan that we have put forward.”