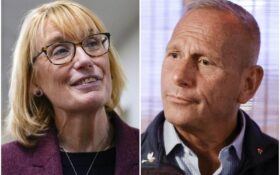 On the very same night that President Joe Biden gave a speech warning that democracy was in danger and political violence from Republicans was on the rise, a top GOP leader was assaulted on his way to a debate on Wednesday.

So where’s the mainstream media coverage?

Republican Gen. Don Bolduc, the GOP senatorial candidate for New Hampshire that is running against incumbent Sen. Maggie Hassan, D-N.H, was physically attacked by a person in a crowd outside the building hosting an election debate, his campaign said.

Law enforcement apprehended the suspect, according to Breitbart.

“Prior to the debate, an individual in the crowd gathered outside attempted to punch the General and was quickly apprehended and arrested,” Bolduc’s spokeswoman Kate Constantini told Breitbart.

“We are grateful to the quick response from law enforcement on the scene,” she reportedly said.

“As the General said on stage tonight, it’s time to lower the temperature of the political discourse in this country,” Constantini said.

Don Bolduc’s campaign says he was the victim of an attempted assault tonight while walking into the debate. Someone tried to attack/punch him and was arrested, a spokesperson says. He wasn’t harmed.

According to Hassan’s campaign, the attacker was a known Libertarian Party activist that had previously gotten aggressive with Democrats.

“It’s a sign of political problems,” Bolduc said during the debate. “Republicans and Democrats that fuel issues with people that get them to the point where they are just so upset at an individual that they strike out. It happened to me outside just before I came in here. This is wrong and it needs to be stopped.”

Reports say the man “took a swipe” at Bolduc while calling him a “war criminal” because of his 10 tours of duty in Afghanistan.

“They were calling him a war criminal,” a senior campaign adviser, Rick Wiley, told The Washington Examiner. “And then one of them must have said something or took a swing at him when he was over there shaking hands with his supporters. … That’s when all hell broke out.”

Disgusting behavior. We saw this same libertarian party activist get aggressive with our campaign volunteers at this debate and the last. #NHSen #NHPolitics https://t.co/BzaFzpjNsi

But while the debate after the attack was civil, it was also fiery. Bolduc accused Hassan of failing to answer questions and instead giving “Washington, D.C., career politician non-answers.”

“That’s what she’s going to get away with up here, all night long,” he said after Hassan was asked whether federal government overspending has led to inflation. She acknowledged the hardship inflation has inflicted, and described her work on the bipartisan infrastructure law President Joe Biden signed last year and the $280 billion package aimed at creating more high-tech jobs by boosting the semiconductor industry and scientific research.

On his turn to talk about government spending and inflation, Bolduc said he would’ve voted against the COVID-19 relief bills in Washington and that the best way to lower inflation would be reversing the Biden administration’s “disastrous” energy policies that Hassan supports.

“Everything she does causes more infrastructure, more government, more money, more pain and hardship for Americans,” he said.

On abortion, Bolduc again was confronted with his past statements. While he now says he opposes a national abortion ban, in the past he has said would never oppose anti-abortion legislation (“I’m not going to vote contrary to pro-life”).

“I will not vote for any federal legislation that has to do with abortion,” he said. “I believe in states’ rights and in the state law. And that is the end of the discussion.”

But Hassan argued he can’t be trusted given his conflicting statements.

“He is a yes vote for a nationwide abortion ban and he’s trying to conceal it,” she said.