Top generals: If you want equality, women must register for the draft - The Horn News 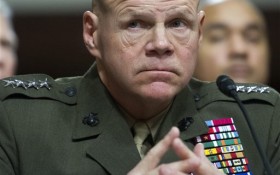 The top Army and Marine Corps generals told senators Tuesday that it will take up to three years to fully integrate women into all combat jobs, adding that women also should have to register for the draft.

The military service leaders repeatedly vowed that they will not lower standards to bring women into the more grueling jobs. But they warned that inherent physical differences and different injury rates between men and women will have an impact on how the integration moves ahead.

The selective service question revealed differences between the military chiefs and their political leaders. Army Gen. Mark Milley and Marine Gen. Robert Neller both flatly said that women should be included in the requirement to register for the selective service at age 18. But Navy Secretary Ray Mabus and Army Acting Secretary Patrick Murphy would only say that the issue should be discussed. Political leaders overall have so far been reluctant to endorse the draft requirement.

After a lengthy review by the services and the Pentagon, Defense Secretary Ash Carter in December ordered all combat jobs open to women, but also vowed that no standards would be lowered to make way for women.

The Marine Corps initially sought to keep certain infantry and combat jobs closed to women, citing studies showing combined-gender units are not as effective as male-only units. Allowing women to compete for ground combat jobs, it concluded, would make the Marine Corps a less-efficient fighting machine.

Both Mabus and Carter rejected that argument. In response, Marine leaders, including Neller, immediately began to lay out implementation plans, but they continue to make clear their reservations.

“We have a decision and we’re in the process of moving out,” Neller told the senators. “We will see where the chips fall. And, again, our hope is that everyone will be successful. But hope is not a course of action on the battlefield.”

Neller said that Marine Corps testing revealed two significant differences between all-male units and those with men and women. He said all-male units were able to better march long distances carrying heavy loads and also were able to fire their weapons more accurately after marching over distance.

Being big and strong and having a “certain body mass give you an advantage,” said Neller. He added that as women do more conditioning and weight training to meet combat standards, they have been more likely to be outside the required weight and size requirements for women. The Marine Corps, he said, is looking at that issue.

Mabus and Neller have deep differences on how the Marine Corps should proceed, and provided their views in starkly different ways.

Mabus presented a lengthy opening statement laying out his views and why he disagreed with the Marine’s recommendation, and had to be warned by McCain to finish up quickly. Neller, meanwhile, made no opening statement, provided short, clipped answers to questions, and avoided most direct disagreements with Mabus.

Lawmakers, including McCain, criticized Mabus for deciding to allow women to compete for Marine combat jobs — and telling the media — before fully reading and taking into account the massive Marine study.

“You’re handling of this issue has really complicated this issue for those of us who support integration,” McCain snapped at Mabus at the end of the hearing.

Milley said he fully supported allowing women to seek combat jobs, but cautioned that it should be done slowly and methodically so that, “we must not rush to failure.”

The military leaders said that for the first time the services are developing standards that are specific to each job, based on the requirements and tasks that must be accomplished. Those standards, they said, will be applied equally for men and women.

He added that at this point he does not expect that women will be forced into infantry jobs. The Army, he said, doesn’t involuntarily send men to the combat post right now and the service is meeting all its needs. But, he said, things could change in the future depending on the military’s needs.

Carter’s order to allow women to compete for combat posts opens the final 10 percent of military positions to women — a total of about 220,000 jobs. And it allows them to serve in the most demanding and difficult jobs, including as special operations forces, such as the Army Delta units and Navy SEALs.