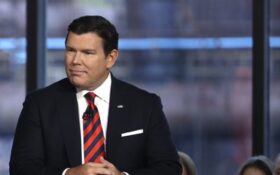 A handful of prominent Fox News anchors returning to New York from the presidential debate in Nashville have been instructed to quarantine after reportedly coming into contact with a person who was infected by the novel coronavirus.

According to confirmed reports from multiple sources including the New York Times, The Washington Post and Press Herald, someone sick with COVID-19 had been on the plane with the anchors.

The infected person, who went unnamed in reports, first set foot in Nashville testing negative for the virus.

By the time everyone had packed up to return from the debate, they’d tested positive.

News outlets familiar with how the network is handling protocol say that it’s not enough for the anchors to test negative just once.

They must do so three times before returning to the public.

Until then, they’ll air their respective shows from home, say those close to the network.

According to NYT, Fox News had been the fastest of the major networks to return back to its broadcast studio, with several hosts having already gone live from headquarters in Midtown Manhattan.

Baier, speaking on colleague Brian Kilmeade’s radio show on Monday, said all precautions are being taken.

“I’ve tested negative three times now and I’ll be doing the show from home this week,” he said. “And we’ll be in preparation for Election Day.”

Perino and Williams are both on the Fox show “The Five,” which had only recently returned to the studio after its hosts worked remotely since the beginning of the epidemic.

Only people critical to the broadcast will be allowed in at Fox headquarters on election night, a memo said.

Baier and MacCallum have been expected to co-anchor the network’s election night coverage from the Manhattan studio next week.