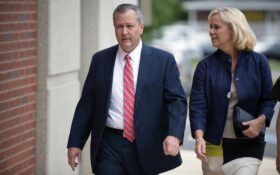 Former Alabama House Speaker Mike Hubbard, for years once of the state’s most influential politicians, reported to jail Friday to begin a prison sentence for his 2016 ethics conviction.

Hubbard reported to the Lee County Detention Center in Opelika, according to jail records, to begin his four-year sentence. The Auburn Republican was for years one of the state’s most powerful politicians until the ethics conviction in a corruption case ended his political career.

Prosecutors accused Hubbard of leveraging his powerful public office to obtain clients and investments for his businesses. His defense lawyers maintained the transactions were all aboveboard.

“Mike Hubbard is a strong Christian man and has accepted the current situation but firmly believes in his innocence and looks forward to exploring other options to clear his name,” attorney Lance Bell said.

A jury in 2016 convicted Hubbard of 12 counts of violating the state ethics law, but six were overturned on appeal. The Alabama Supreme Court last month refused to reconsider the case.

The Alabama attorney general’s office said Hubbard had until Saturday to report to the jail to be processed and turned over to the Department of Corrections.

He had been free on appeal since his 2016 conviction as he unsuccessfully fought to completely overturn his conviction.

Attorney David McKnight said they are considering additional appeals or asking a judge to reduce his sentence since some counts have been overturned.

Hubbard, the architect of the GOP’s takeover of the Alabama Legislature in 2010, was a legislator from Auburn and former chairman of the Alabama Republican Party. He was elected House speaker soon after the Republicans won control of both legislative chambers.

Hubbard was automatically removed from office after his 2016 felony conviction.