Top Dems: Trump doesn’t scare us at all - The Horn News 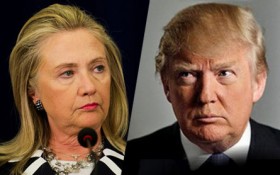 Hillary Clinton’s top supporters and other Democrat insiders have a message for Republican voters – bring on Donald Trump, and Ben Carson, too.

The Associated Press contacted all 712 superdelegates to the Democratic National Convention next summer, and asked them which Republican they thought would be their party’s strongest opponent in the general election.

And it’s clear that the Democrats continue to underestimate both Trump’s and Carson’s popular appeal among voters.

“As a Democrat, I’d love to see a Trump-Carson ticket,” said Bob Mulholland, a member of the Democratic National Committee from California. “We’d probably win back the Senate and pick up the House as well.”

Offering a window into how the Democratic establishment is sizing up the competition, most superdelegates expressed bewilderment at a Republican field in which billionaire Trump and retired neurosurgeon Carson are leading in polls while Jeb Bush, the son and brother of presidents, struggles.

Of the 176 superdelegates who answered the question, 65 said Rubio, the first-term senator from Florida, would be the Democrats’ strongest opponent.

“Rubio speaks well and he could generate appeal among Latino voters,” said Chris Wicker, vice chairman of the Nevada Democratic Party, referring to Rubio’s background as a Cuban-American raised by working-class parents. “He doesn’t say some of the crazy stuff that the other leaders have said.”

Businesswoman Carly Fiorina and former New York Gov. George Pataki each got a vote. So did Wisconsin Gov. Scott Walker, who dropped out of the race, and Mitt Romney, the 2012 Republican nominee.

Democratic superdelegates can support the candidate of their choice at the party’s summer national convention, regardless of whom voters choose in the primaries and caucuses. They are members of Congress and other elected officials, party leaders and members of the Democratic National Committee.

They are the ultimate party insiders. With 712 votes at the convention, superdelegates make up about 30 percent of the 2,382 needed to clinch the Democratic nomination.

In an interview, Rubio played down his status among Democratic insiders.

Many Democrats surveyed were dismissive of Trump. Some said his sharp rhetoric on issues like immigration won’t fly in a general election.

About one-fifth of Democratic superdelegates who answered the survey said they believe Bush, who is fighting to stem a slide in GOP polls, could bounce back and pose a threat to Clinton, given his name recognition and early fundraising.

Even more superdelegates praised Kasich, a two-term Ohio governor who served 18 years in the House. Some Democrats described Kasich as the “adult” in the field who could campaign from the center and win his home state, a key battleground.

The last candidate to win the White House without Ohio was Democrat John F. Kennedy in 1960.

“A Democratic nightmare would begin and end with a Rubio-Kasich ticket,” said former state Rep. Boyd Brown of South Carolina.

The AP results come as Clinton is solidifying her support among the superdelegates. More than two months before the first primaries and caucuses, Clinton has public endorsements from 359 superdelegates, while Vermont Sen. Bernie Sanders has 8 and former Maryland Gov. Martin O’Malley has 2.

Joe Rugola, a labor union leader in Ohio, said Trump and Carson might be written off in a normal political year, but “I don’t think there’s anything normal about politics in America right now.”