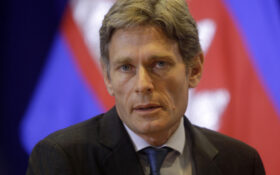 Rep. Tom Malinowski, D-N.J., has a dirty secret that has just been uncovered — and the scandal is exploding.

Before being elected as a congressman, Malinowski was a high-paid lobbyist in Washington, D.C. where he worked against the establishment of a national sex offender registry.

According to The Washington Free Beacon, Malinowski worked as a top lobbyist for Human Rights Watch where he campaigned against a 2006 crime bill that toughened punishments for pedophiles and sexual predators.

Malinowski argued that there was “no legitimate community safety justification” to create a national registry for offenders that raped or victimized children.

His organization said the crime bill was unfair because it put convicted rapists and pedophiles “at risk of retaliation and discrimination.”

“Crime, even a crime that involves sexual misconduct, should not be license to run roughshod over principles of fairness and proportionality,” read a letter signed by Malinowski and his fellow lobbyists, The Beacon reported. “Human Rights Watch urges you to vote against [the sexual offender bill].”

Malinowski is a freshman congressman running for his first reelection. He defeated former Rep. Leonard Lance, R-N.J., for the state’s 7th District House seat in 2018.

The news comes at a bad time for Malinowski.

According to recent polls, Malinowski trails GOP challenger, State Senate Minority leader Tom Kean Jr., R-N.J. Kean’s campaign has raised over $1.3 million for his campaign and had more than $310,000 in the bank as of early July.

In fact, Malinowski’s re-election is in such trouble, former President Barack Obama has personally gotten involved in the campaign, endorsing the embattled New Jersey Democrat on Monday.