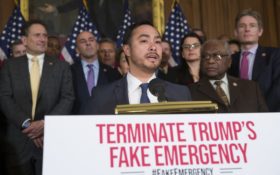 Rep. Joaquin Castro, R-T.X. just put out what critics are calling a “hit list” to “name and shame” supporters of the president.

But there’s one more problem — at least one of these “shamed” Trump donors also contributed to Castro’s own campaign.

According to Castro, these Americans political opinions are evil… even though they donated to his campaign as well.

“Sad to see so many San Antonians as 2019 maximum donors to Donald Trump,” Castro tweeted. “Their contributions are fueling a campaign of hate that labels Hispanic immigrants as ‘invaders.’”

What followed was an infographic, displaying the names of San Antonians — where Castro is from — who donated to Trump.

Fox News spoke to Wayne Harwell, who showed up on the list.

It turned out that he donated to both Trump and Castro… but that’s going to end soon.

“I was also on a list of people that gave to Castro and if he dislikes me enough that he wants to put my name out there against Trump, I’m not going to give money to him,” Harwell told Fox News. “Obviously Castro feels pretty strongly against me.”

“I think some of the Democratic rhetoric is more hateful than some of Trump’s rhetoric,” he continued. “I think the San Antonio community needs to take a real deep look at what Castro is doing. Why is he doing this?”

Not only is it a foul move — it’s downright dangerous.

It’s a move that opens up innocent people to liberal retaliation.

Just look at the video released this week of liberal supporters gathered outside Republican Sen. Mitch McConnell’s house, saying they wanted to kill him.

It was a shameful move — and a new low for Democrats.